How To Mount And Tilt Solar Panels

Tilt Concept - Mounting solar panels in a stationary location such as on the roof of a house or in a field is fairly straightforward. Here in the Northern Hemisphere the basic concept for stationary panels is to tilt them toward the south at a certain angle relative to one’s latitude. By tilting panels toward the sun optimal energy is captured. But mounting panels on the roof a RV or Bus Conversion is a different story. The fact that buses and RVs are not typically stationary makes optimal panel tilt a bit of a challenge. There are however a few different options for dealing with this problem.

Flat Mount - The simplest of ways to mount solar panels to the roof of your bus or RV is to mount them directly to the roof. For some RVs the roof may be relatively flat, providing less than optimal but consistently flat panel orientation. The roof of a bus however is typically curved, which may cause panels to actually be pointed in the opposite direction of the sun at times. Some folks have added legs or racks to create a flat mounting surface. Though flat mounted panels are less efficient than properly tilted panels, this can be compensated for by simply adding more panels to your system. The nice thing about permanently mounted flat panels is that you don’t have to worry much about sun direction each time you park in a new spot, and solar gain will always be relatively the same.

Tiltable – A second option is to install tiltable racks to mount your panels to. These can be homemade or purchased from various solar dealers. The racks typically consist of hinged brackets that mount to your roof, which you can leave flat during travel, or tilt in a single direction once parked. If you are able to park in the ideal orientation where your panels can be tilted to the south, you can significantly increase your solar energy input. However, since these racks only tilt in one direction, you may often find yourself having to leave them flat. Another consideration is that manufactured tiltable racks are typically designed for one single panel. If you have six or eight panels on your roof, getting up there to tilt each one can be cumbersome.

The Best of Both Worlds – For our Bus Conversion we found a multidirectional adjustable system to be best for various conditions. We started with six 100w panels and separated them into two three panel arrays. We bolted each array of three panels together and mounted them on respective sides of the roof (one set on driver’s side, one set on passenger side). The panels are mounted to hinges along the center of the roof, and secured to brackets with finger nuts at the outer edge of the roof. Due to the natural curve of a school bus roof, when the panels are in the down position each array sits at a slight angle, in opposite directions. When traveling, keeping the panels close to the roof like this decreases the risk of damage from low hanging tree branches, and still ensures that at least half of the system receives good sunlight. 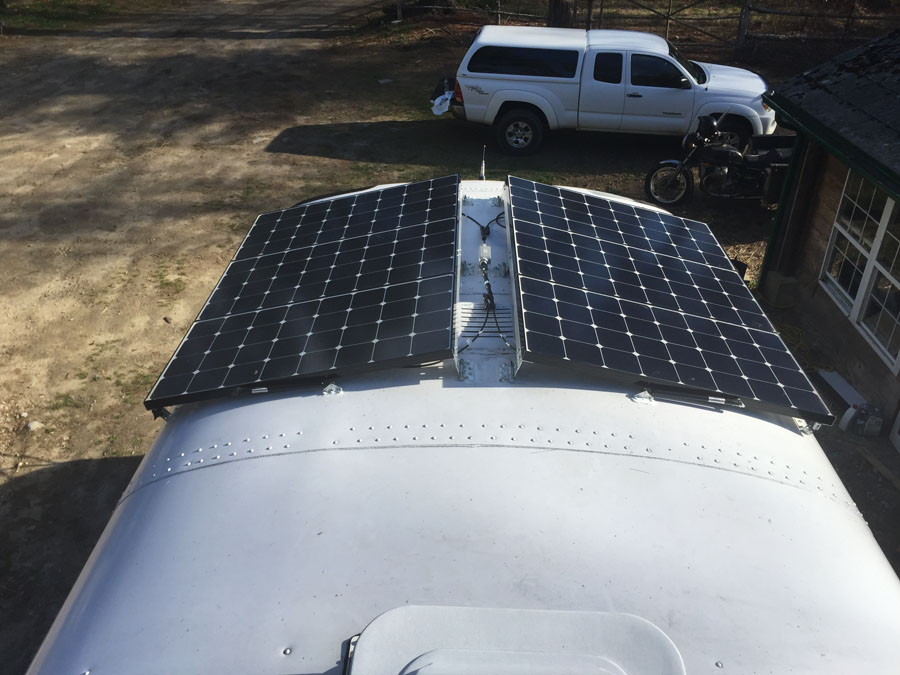 Once parked, either of the two arrays can be tilted up to match the directional tilt of the other. This means that the entire solar system can be adjusted to tilt toward either side of the bus at any given time, giving twice the flexibility of a standard single direction tilt rack. By simply removing the finger nuts that hold down the outer edge of an array, gas struts effortlessly lift the three panels into the appropriate position. By properly sizing the struts to the size and weight of the panels, the array can be held up without any further effort. To lower the array, simply pull down on the panels to compress the gas struts and reconnect finger nuts to brackets. 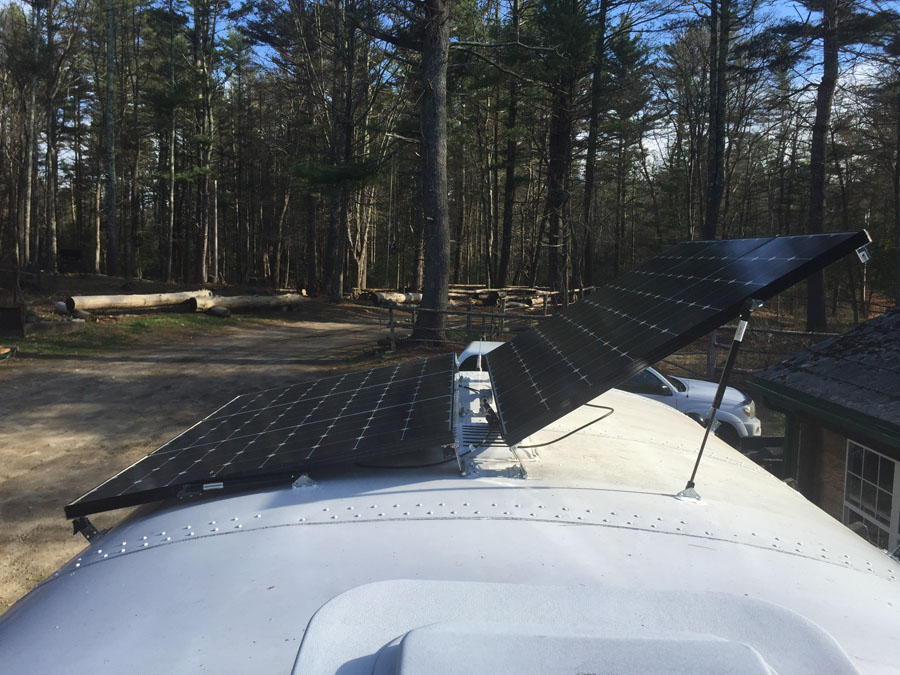 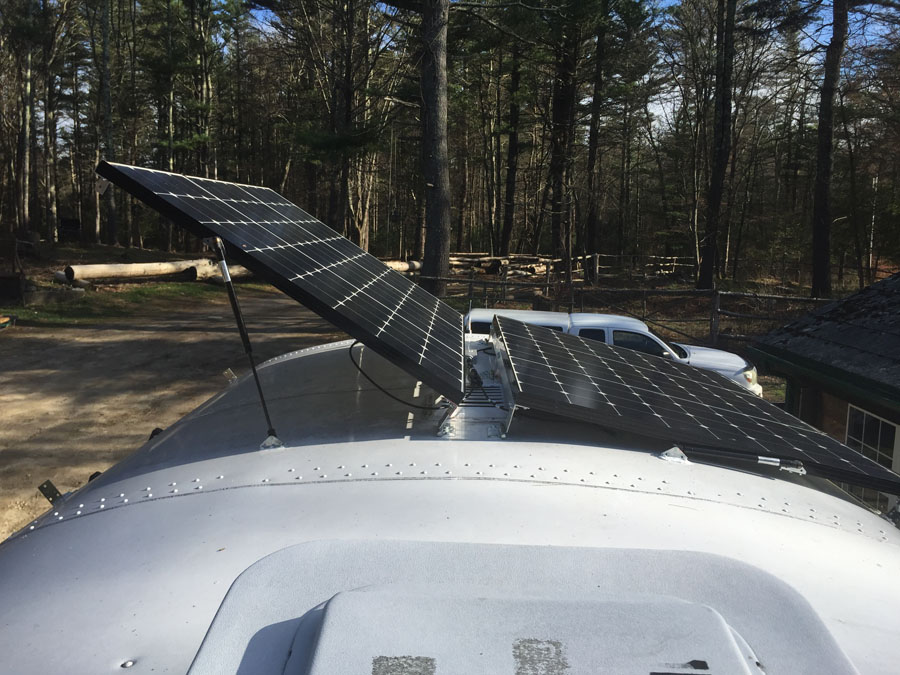 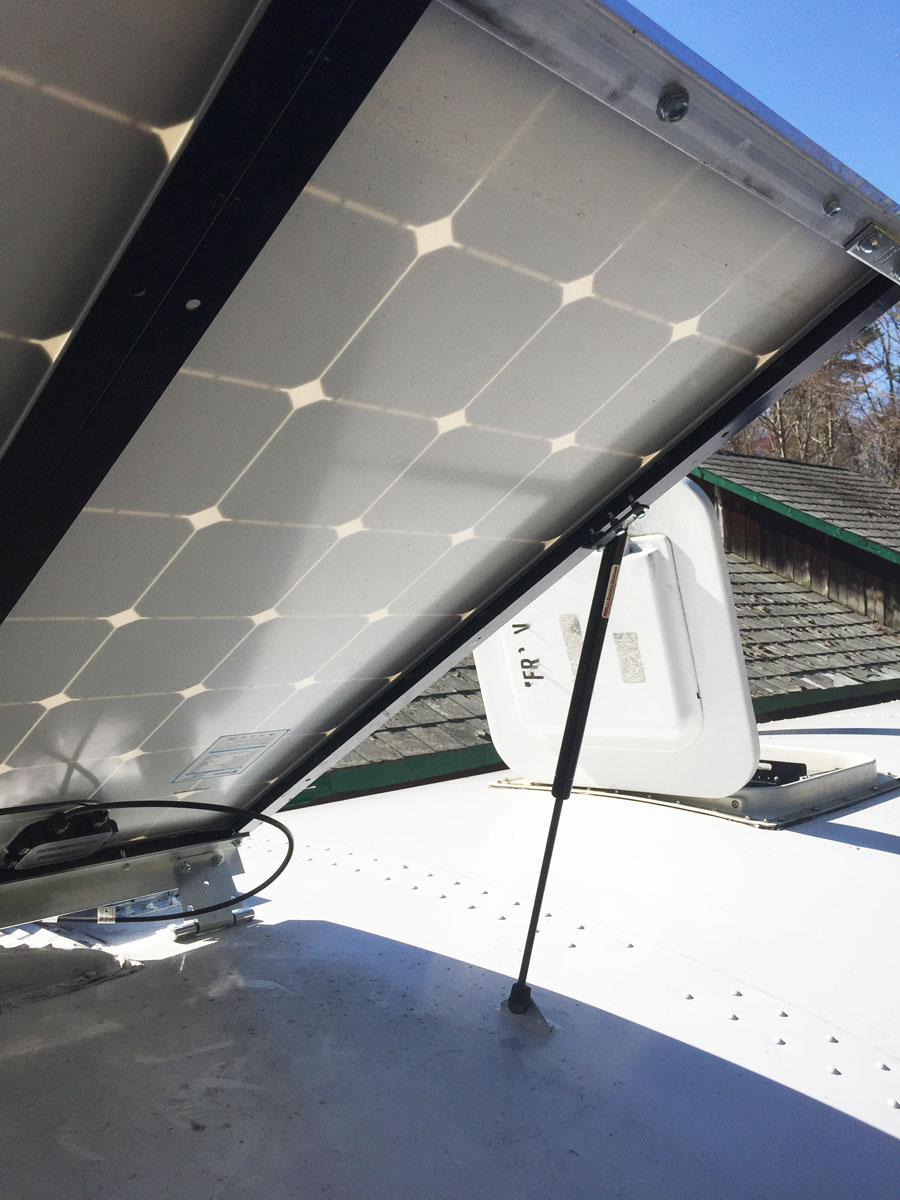 When configuring panels in such a way, one should also consider the way in which panels are wired. Because our panels are mounted in two separate arrays that may receive differing amounts of sunlight depending on orientation and sun direction, they must be wired appropriately in order to maximize efficiency. The three panels that makeup the driver’s side array are wired together in series, and the three panels that makeup the passenger side array are also wired together in series. The two arrays are then wired together in parallel to the charge controller. This allows each array to act somewhat as its own 300w system, without being adversely effected if the other array is shaded. When the two arrays both receive sunlight, additional amperage is generated. 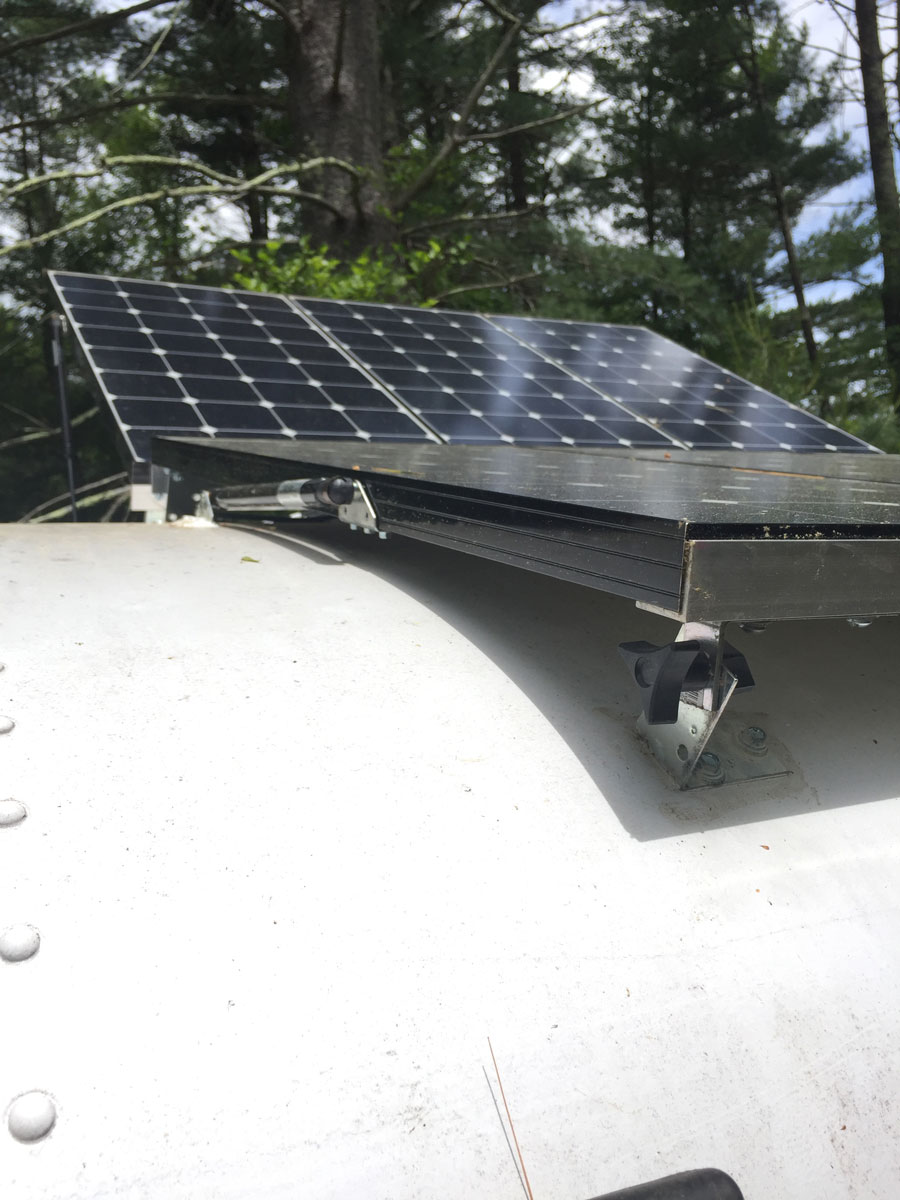 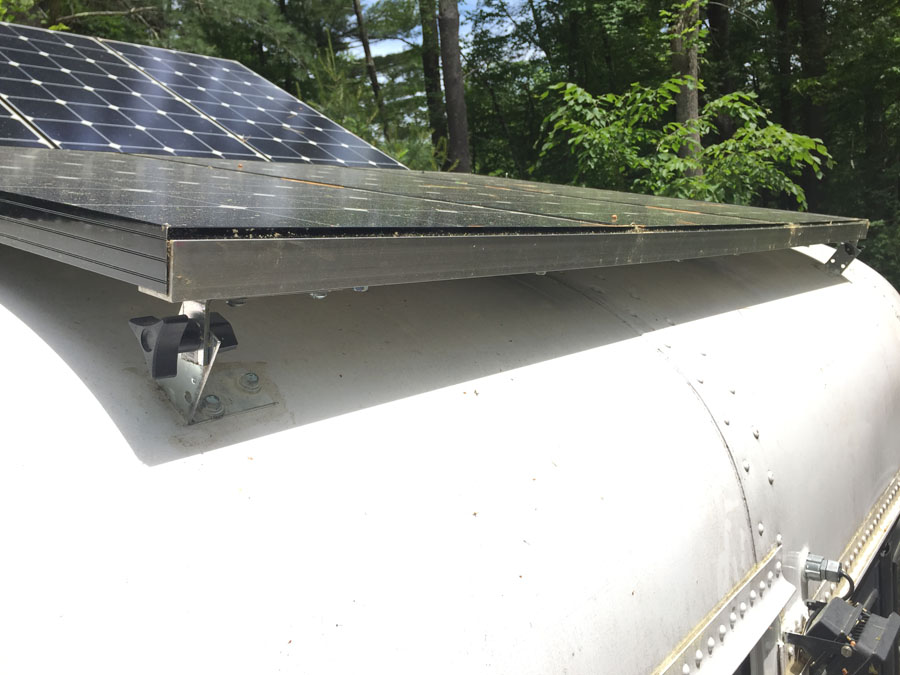 What Works for You – When planning your system you can go as crazy or as basic as you like. You can just bolt a bunch of panels down and be done with it, or you can come up with fancy mechanized ways to tilt the panels at the push of a button. You should take into account things like; How much power do you need? How much available roof space do you have? How much money do you want to spend? How often do you want to have to climb up on the roof? At the end of the day you need to install a solar system that works for you. So think it through, ask around, research, and consider all the pros and cons of different options. And most of all, be creative!