Bus Life Adventure's tiny living event, The Bus Fair, had to be postponed until 2021 due to the pandemic, so we're making the most of the situation by virtually showcasing featured buses and their owners through The Bus Fair Feature Series. This week we meet Kelsey and Jaimie aka Kels & Jay. The pair met in England as neighbors and fell in love over buffalo chicken dip (true story!). They now live in the United States where they got married and built the school bus conversion of their dreams. Here Kels & Jay share their story along with the ups and downs of getting their skoolie livable and road-ready. 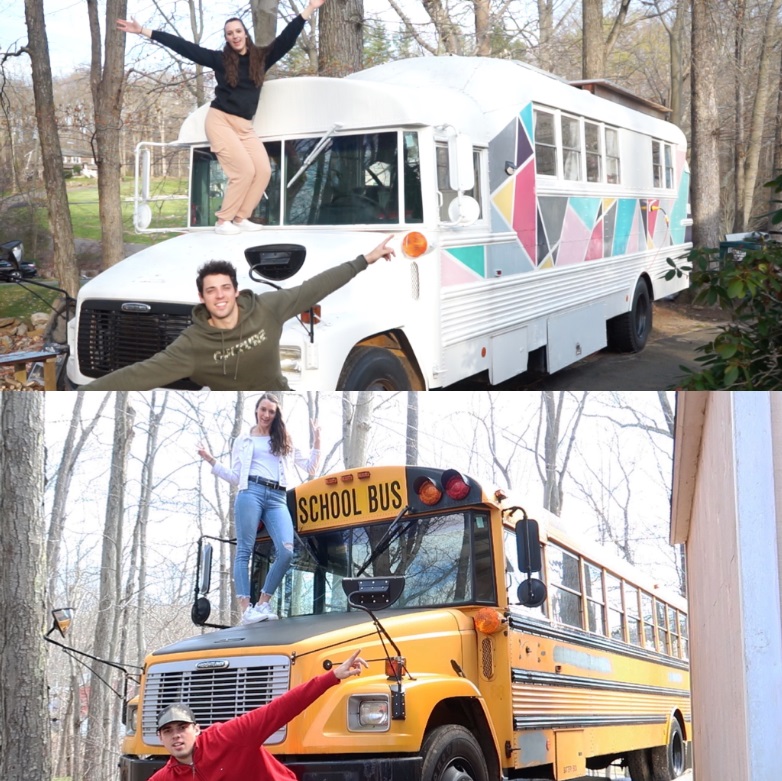 Back in 2016, I, Kelsey, moved to England to continue playing basketball and get my Master’s Degree. He lived next door to me in the other basketball house and we met there in the kitchen. The running joke is we fell in love over buffalo chicken dip because after I made some for Jamie, we were pretty much inseparable and together every day after that. When basketball was over we’d save up and travel Europe and definitely caught the travel bug there.
When I graduated and my visa was up, I had to come back to America. Jamie came here about a year later and we got married. We were both bored with routine and were craving adventure, and that’s why we decided to convert a school bus into a tiny home. 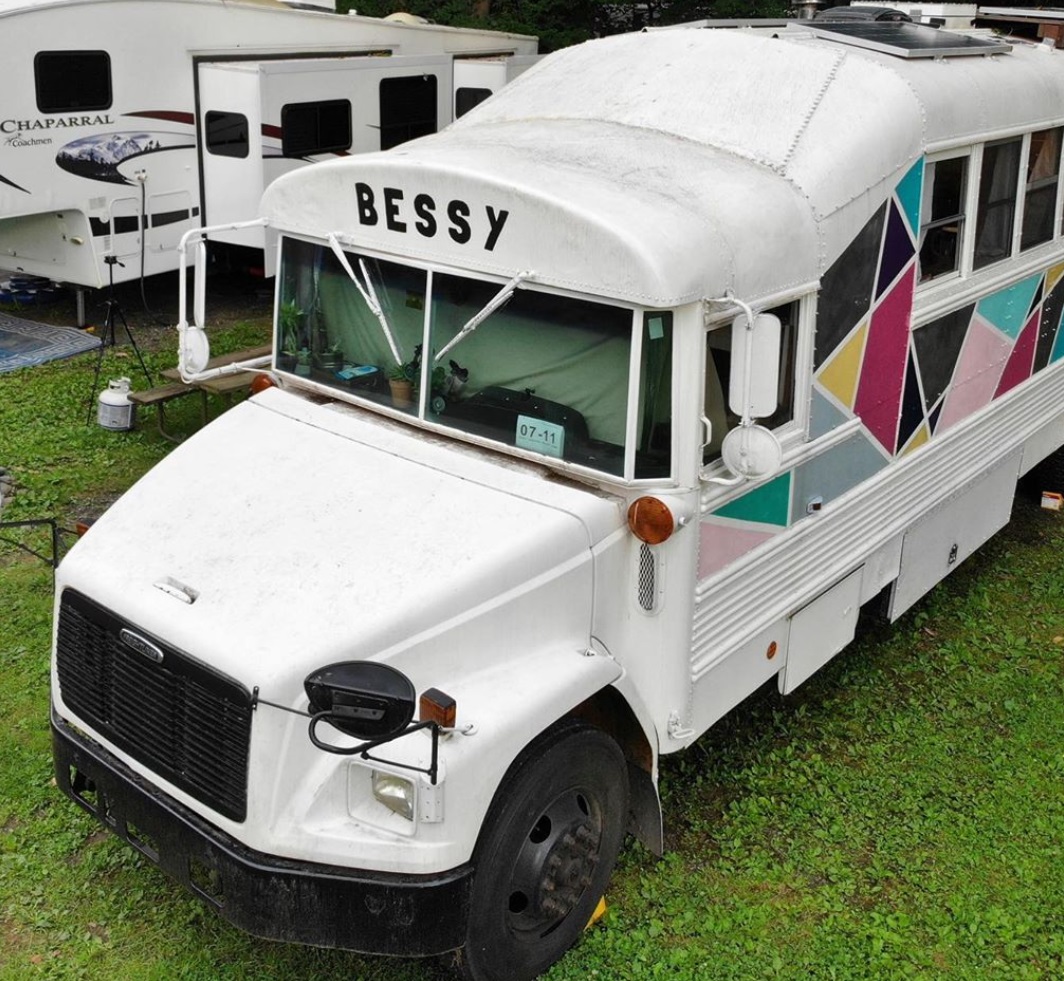 Why a bus?
There are a lot of reasons we chose a school bus rather than an RV or van. As we planned out traveling full-time, I, Kelsey, really wanted a large bathroom with a shower. A van would have been okay if we weren’t full-timing, however, we felt a bus gave us the right amount of space where we didn’t have to sacrifice too much. It truly feels like a home and something we can live in for the next few years, or however long we decide to. A school bus is also extremely structurally sound, so we feel safe in it.
On a level other than the structure and space a bus provides us, we also like the idea that something that once represented mundane routine now represents complete freedom for us. 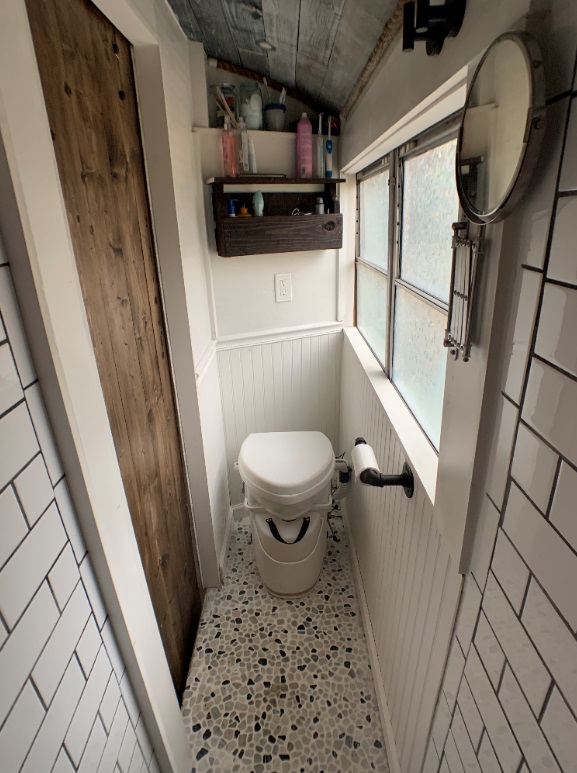 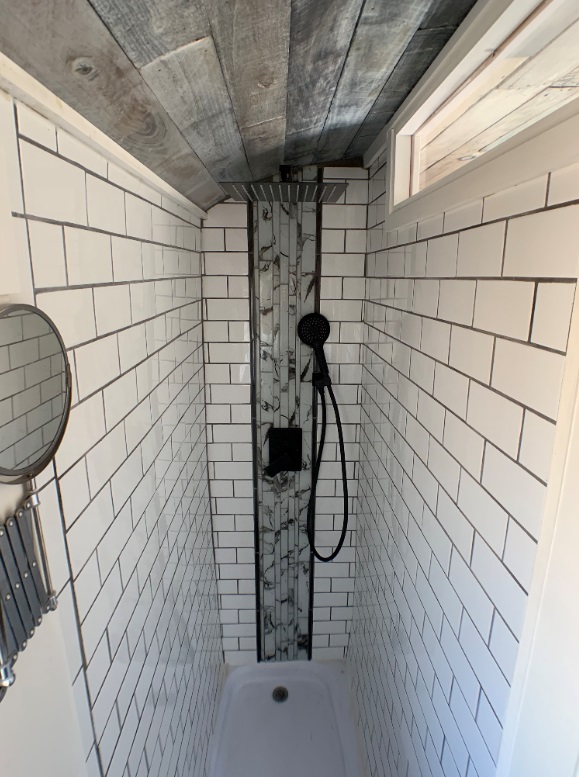 Does your bus have a name or phrase you call it? If so, why did you choose it?
Yes, we recently named her Bessy! We went back and forth on this one for a while, so we took to our social media followers on Instagram and TikTok and asked them what they thought. Bessy stood out to us and was a name we hadn’t seen on a bus before so we went for it.

Will you be full-timing?
Yes, we are already living full-time in our school bus. It’s been awesome!

Where are you converting/ did you convert your bus?
Kelsey’s parents allowed us to convert the school bus in their backyard. They are complete saints for allowing us to do it there!

Did you do the conversion yourself or did you hire someone?
We’ve done absolutely everything by ourselves from the custom cabinets to the solar panels and electricity. We looked up everything on Youtube, it’s amazing what you can learn on YouTube these days! The only time we had any help was one day when the school bus roof collapsed during the roof raise, casual, I know! Our friend had a Jeep and helped us lift the roof back onto the bus, it was pretty crazy. We have a full video about that on our Youtube if you want to hear more about it. 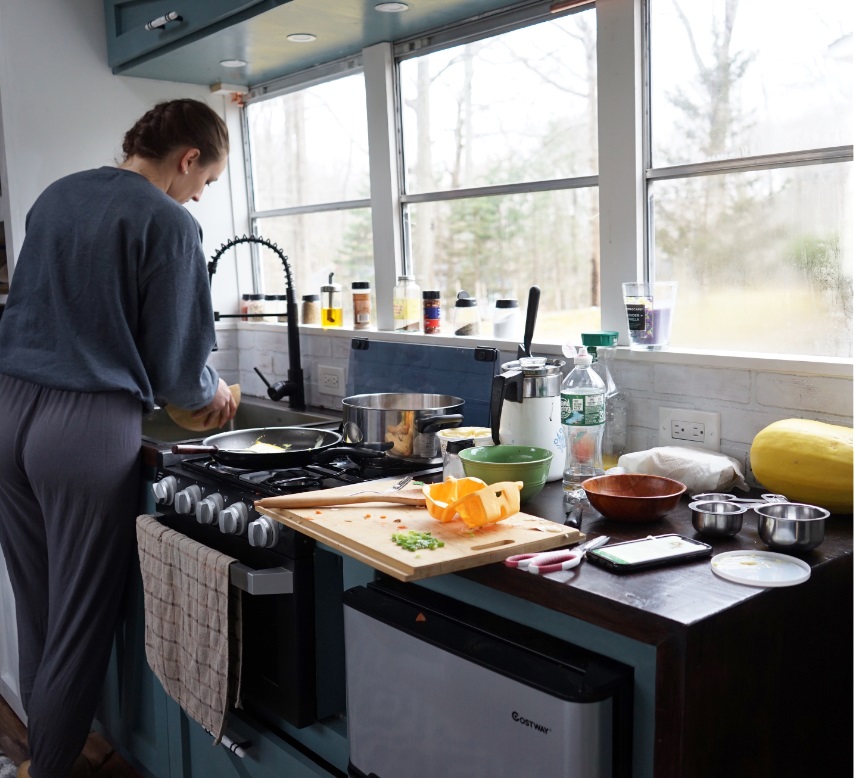 Who are you living/traveling with?
It’s just Jamie, our cat (daughter) Pippa, and me, Kelsey. We’re excited to meet up with different people from the community along the way though!

Were you all on the same page about living bus life or did one person (or more) have to be convinced?
It was Jamie’s dream to convert a school bus. He came to me about the idea and I honestly thought he was joking at first. I kind of reacted the same way people react now when we tell them we live in a self-converted school bus. If you’ve never seen one before, it’s hard to understand how awesome it can be.
Once Jamie showed me a few converted school buses, I was obsessed with the idea as well. How could I not be?

What type of skills for the bus conversion did you have prior and what did you learn or teach yourself so far?
I, Kelsey, had never even picked up a paintbrush before. Jamie had very minimal experience in anything construction. He got a job in construction, but that was after about three months into our build. We learned almost everything from YouTube and by asking the amazing skoolie community. It just shows that anyone who has this dream can do it. It definitely wasn’t easy, but we were on a mission to break the traditional "American dream" and I think it’s that determination that helped push us when the conversion got really tough. 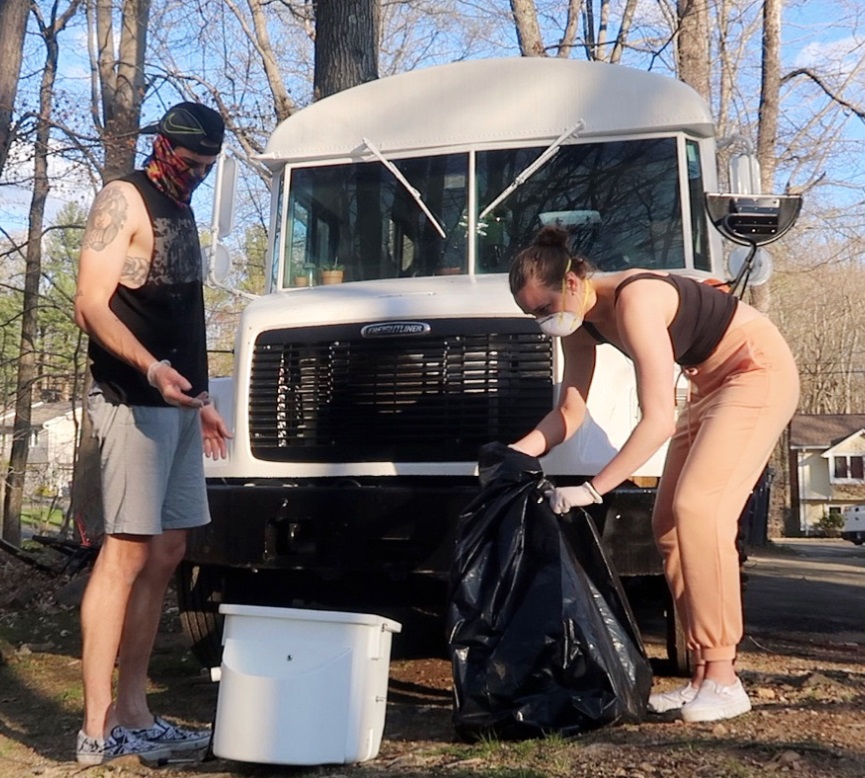 Tips/tricks/advice to help others have who want/are converting a vehicle? Something you wish you had known going into this? Any current troubles?
If you haven’t done a roof raise before and don’t know what you’re doing, definitely get professional help! Another thing to keep in mind is that for the first seven months of our build, it felt like we were putting so much work into the bus and nothing was getting done. It was really deflating, but in the last month everything started to come together and it’s the best month ever. I’d say patience is extremely important for anyone converting a school bus.

What is the most unique feature of your conversion?
We have a fold-out table that really allows us to get the most use out of our space. We love it! 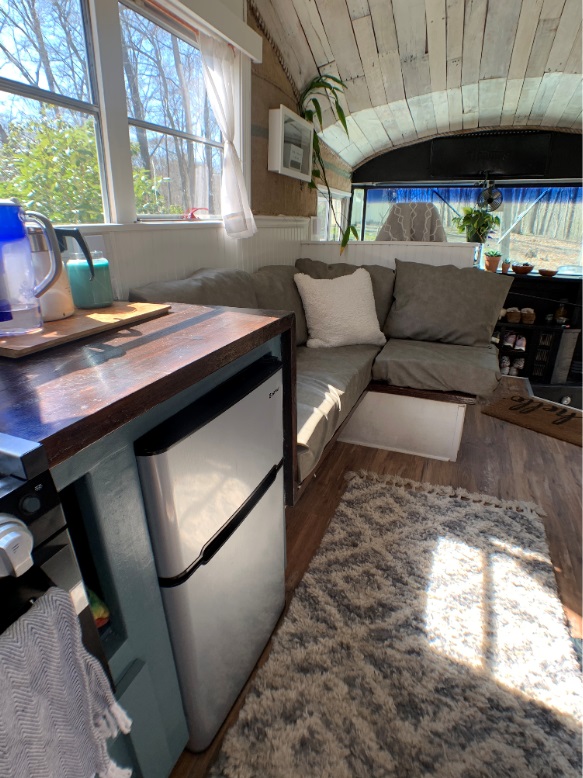 What do you do for income? How often do you work on the bus?
We are both in the process of leaving our jobs. Jamie is in construction and I was in sales. We have been able to save up quite a bit thanks to my parents allowing us to live with them for the past year - did I mention they are saints?! We’ve recently started to make a little money on Youtube and are willing to do jobs like DoorDash or waitressing to get away from ever having to go back to the corporate world.

How has the pandemic affected bus life for you?
We were set to leave right when the pandemic hit, so it affected bus life quite a bit for us. We’ve been lucky enough to have a safe place to stay and the pandemic has also allowed us to save more. Being stuck in one place for a while has also allowed us to work out all the last little kinks of our bus like getting it more organized and comfortable for living in, so for that, we are grateful! 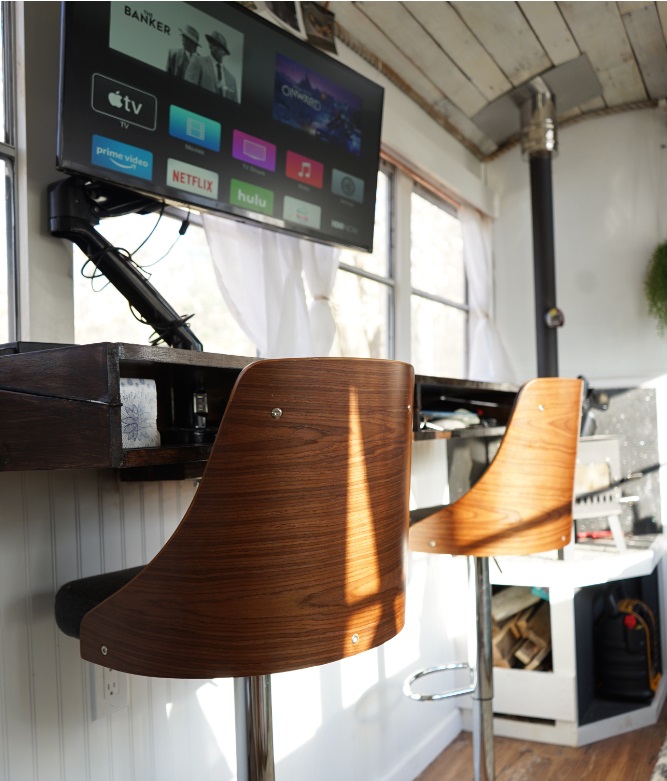 How can people follow your adventures?
We have Youtube, Instagram, and TikTok social media accounts. You can find us on all social media platforms at @KelsandJay !