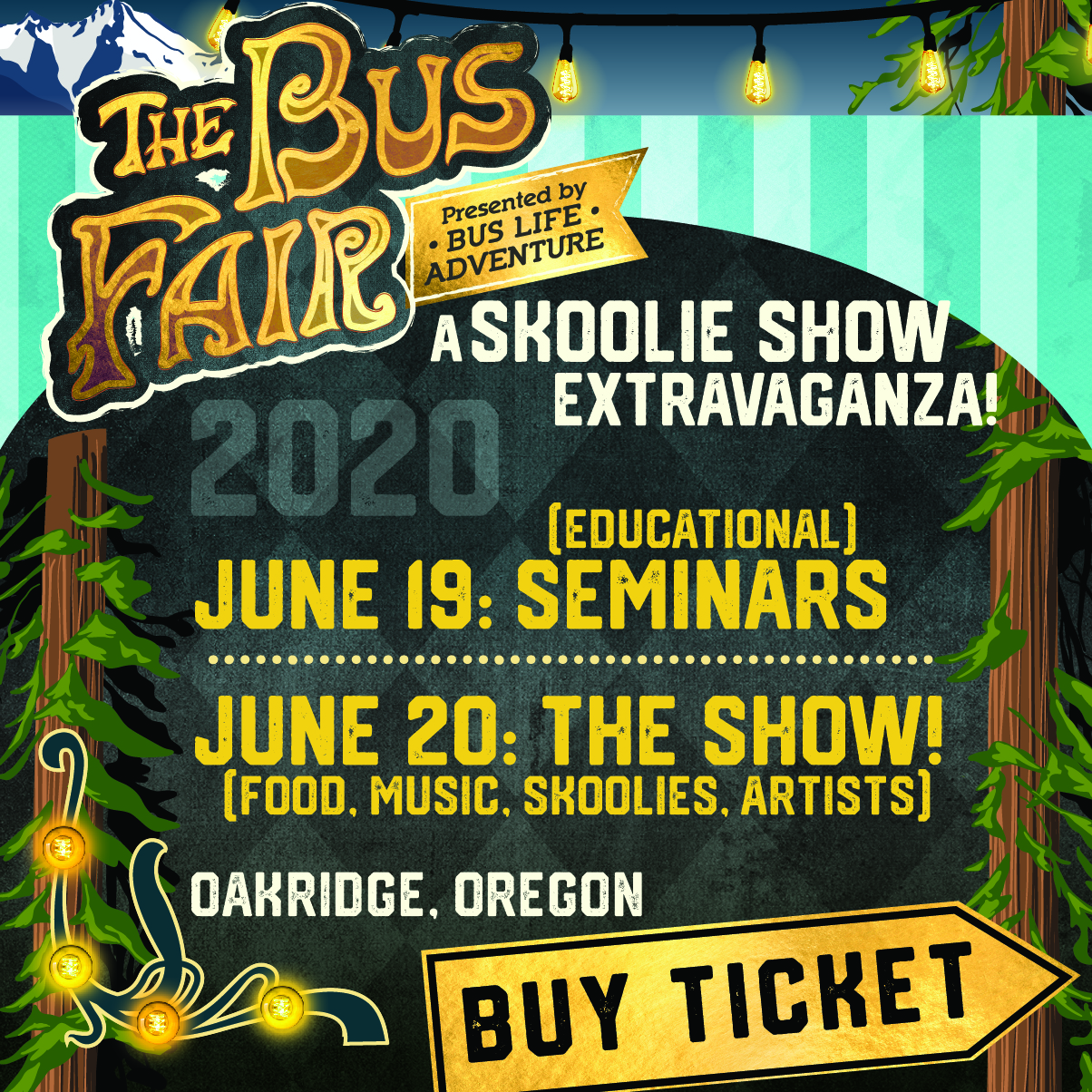 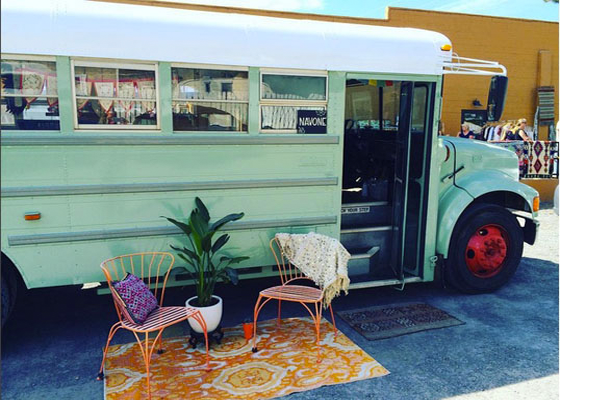 Paying rent sucks. Rachel has spent a good part of her life traveling the globe and living out of a backpack so when she finally settled down in Bend, OR she realized that paying rent for a space to live and for her jewelry studio just wasn't practical.

Rachel found a 1998 International school bus from a kid in Trout Lake, WA and decided that creating a living space and jewelry studio was much more efficient than dumping money into renting. Especially in Bend, OR where there's a bit of a rental crisis and the cost of rent continually rising.

The paint job ended up being the biggest cost of her bus conversion ringing in at $2,500 but the rest of materials coming from her brother's barn or items she was able to find deals on. With a good amount of help from her brother she now has a beautiful 160 square foot tiny home on wheels which she uses to travel and promote her jewelry business.

-Current Location: Bend, OR (in a friend's driveway)

-Purchased From/Location: A kid on a ranch near Trout Lake, WA, who traded an old ranch truck for it. The other guy got it at an auction in North Dakota. She had a pretty tumultuous early life before I adopted her. 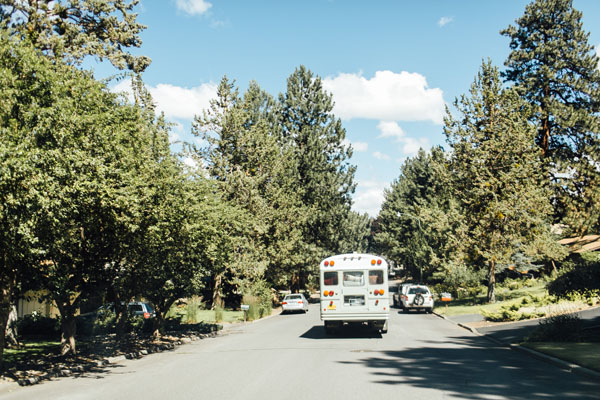 -Cost in materials for the conversion: Welllllll, the paint job has been the biggest expense besides the initial cost of the bus, I dropped $2500 to have her looking good. Other than that, because it isn't a full build-out, it's been quite inexpensive. The snap vinyl flooring came from craigslist for $150 with just the right square footage. Most of the other wood came from my brother's wood pile, except for the 8' long butcher block counter top I bought from Lumber Liquidators in Eugene for $120 and cut into two sections, a 5' lower level and 3' standing level, which are used as my workbench and display area.

-Is the conversion complete or still in progress? It's definitely still in progress. It's fully functional as my jewelry studio and bedroom, but will take a bit more work if I plan on being self-contained. 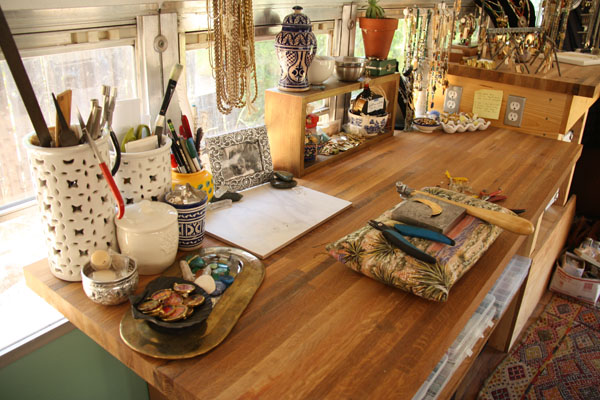 -Does your bus have a name? I've played around with a few, but none have stuck. I need to come up with something quick before it gets deemed the 'Jewel Bus' for good.

Tell us a bit about how the idea to build a bus into a home on wheels came about. I've spent years traveling and living abroad, and after settling in Bend 6 years ago, had a hard time getting used to paying rent. In addition to renting a room in a house, I was also renting a studio space downtown to grow my jewelry line. After nearly a year of paying double rent I figured there had to be a better way to do what I do and still put away acorns for my yearly international adventures. 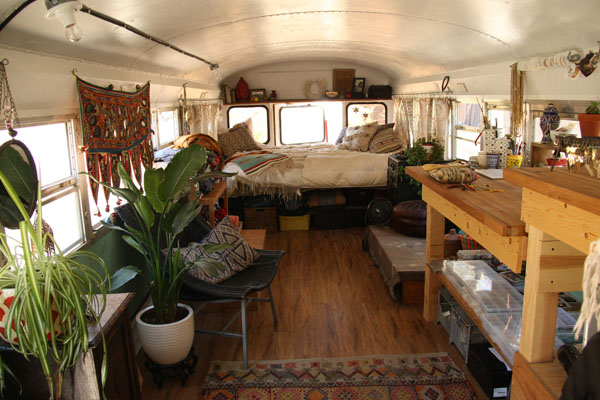 Who is involved or part of the crew with your bus? I had help from several lovely friends in the early stages, taking out seats, painting the interior, snapping down the floor, but my brother has been the biggest help. When I was on a world tour last winter I left the bus in his care with a wishlist of to-do's. He's a super handy guy so he took care of most of them, except for the paint-job and the electrical work, we hired that out. And on said world tour, I met my boyfriend, Airen, in Ecuador (he was living 2.5 hours from Bend in WA where I had purchased the bus), and convinced him to spend the summer in Bend. So he's now the handyman around the bus, hammering nails and screwing in brackets as we discover more and better ways to secure things. 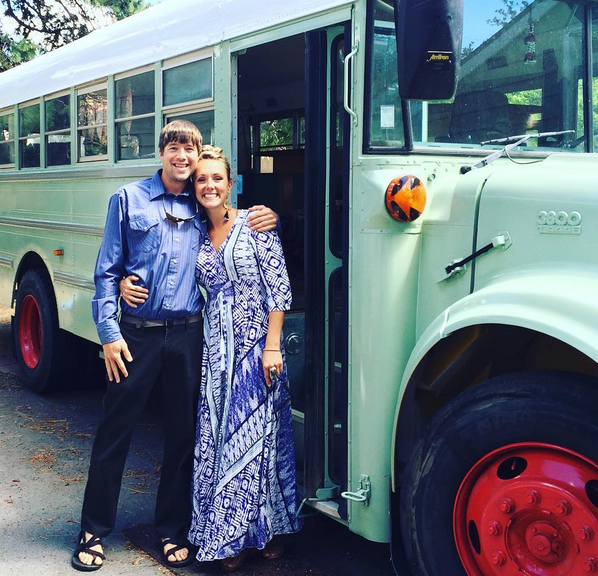 What materials did you use during your build? Any reclaimed/upcycled items? As you can see the conversion is quite minimal, pretty much just wood and flooring, which were mostly from craiglist and my brother's barn. Wow, writing this made me realize I need to call my brother and thank him again. After pricing curtain rods around town, I decided to go with metal piping and towel hooks from Home Depot; I like the look and it was loads cheaper. The fabric for curtains was bought at JoAnne's Fabric Store with a gazillion different coupons, so I think they actually paid me. 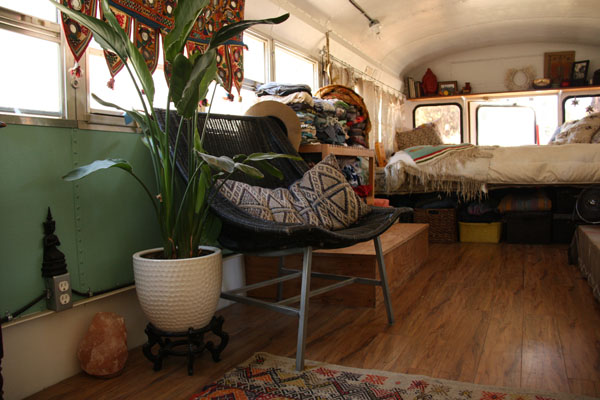 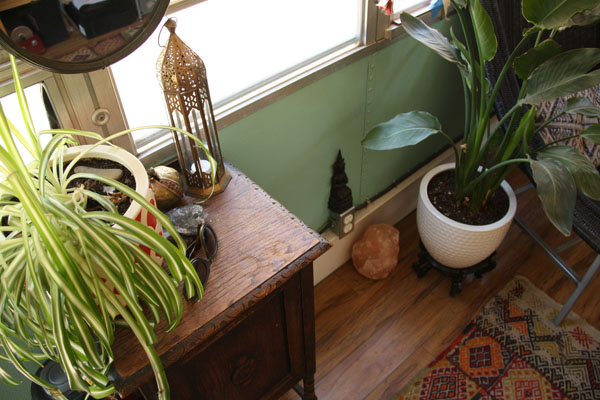 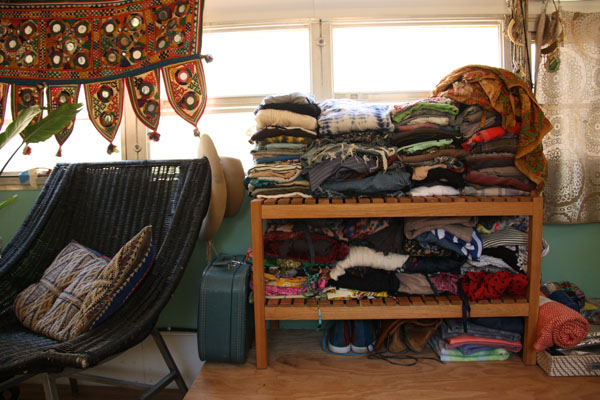 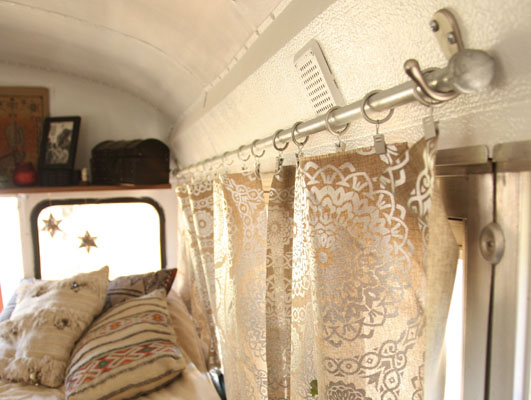 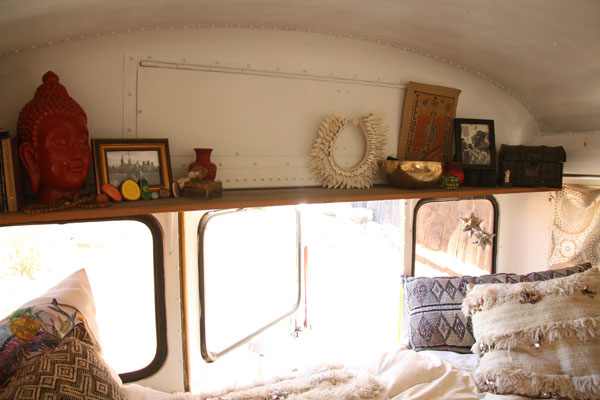 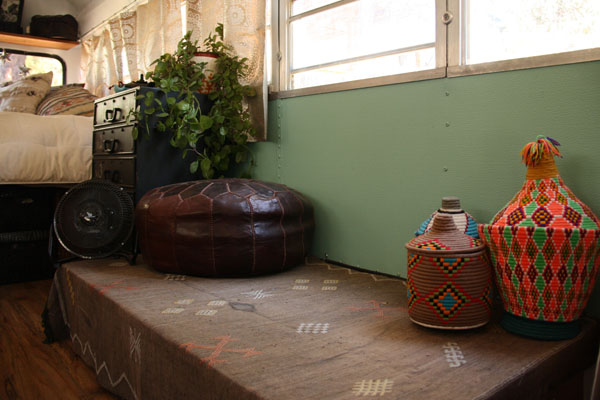 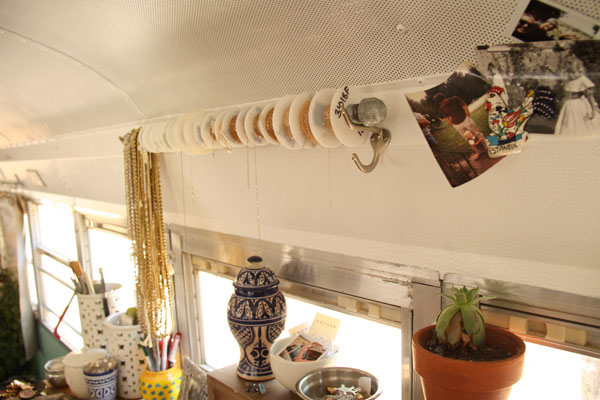 How many can the bus sleep and how is the sleeping arrangement designed? The bed platform in the back is made for a queen, so, I don't know, I could probably fit three friends on there with me, and then a few sleeping on the floor. So around eight if you're into the sardine thing, or just two if you're a bit more civilized. 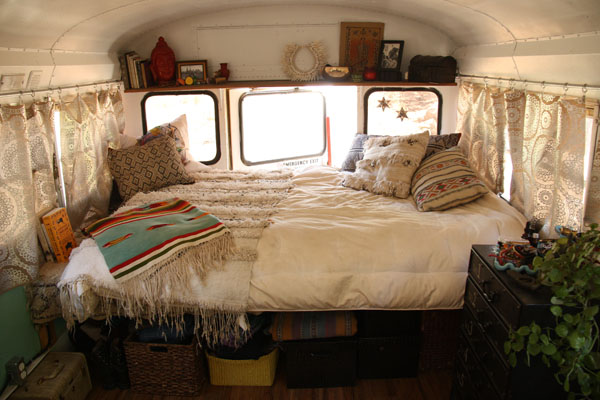 What is your kitchen and cooking setup? When we take her to festivals or camping we just set up a camp table and Coleman camp stove outside with a cooler and 7 gallon water jug for washing up.

What is your power source? I have a plug off the back bumper and a 100' extension cord I use when parked at friend's places. If we're out and about and away from power it's head lamps and candles.

Do you have a heat source for colder weather? Just an electric heater that actually keeps her toasty, although I fly south in the winter, so have yet to spend one in the bus.

How do you stay cool in the hot summer months? Park in the shade! And fans, and vacate the premises during the hours of 12-6pm if it's a 90 degree day. 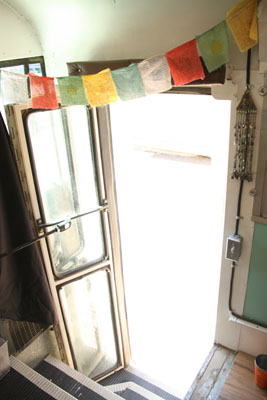 What are you doing for water source? Do you have a bathroom solution for the "rumble guts" hit? Nope, I use my friend's bathroom where I'm parked.

What is the most unique feature of your conversion? I'd say her flashy red wheels. 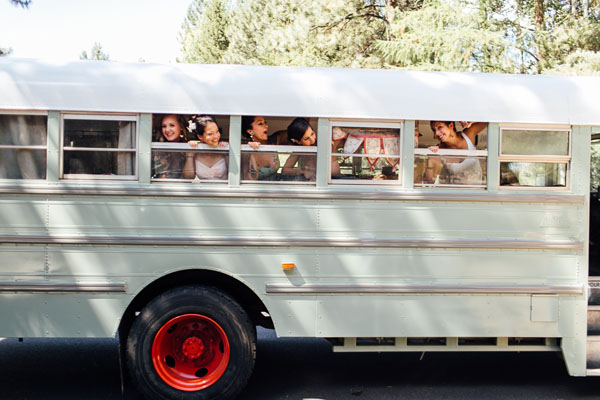 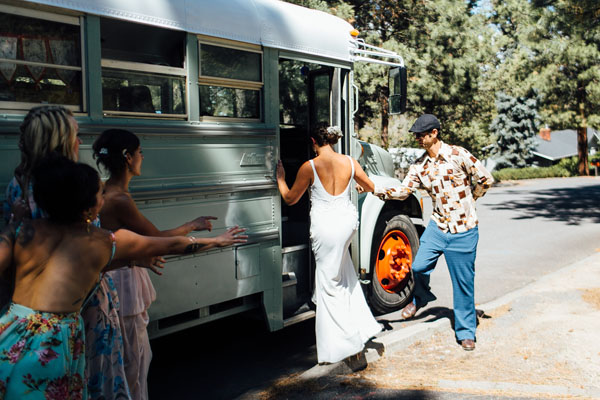 What do you do for income while living in the bus? I'm a jewelry designer and the bus is my studio. The natural light lends itself to creativity and inspiration, and it's really the perfect amount of space to work. Having the bed in the back for mid-day naps is the cherry on top. I travel in the winters, collecting stones and curiosities to use in my designs from around the world, so in that time it's used as my life's catch-all storage pod. 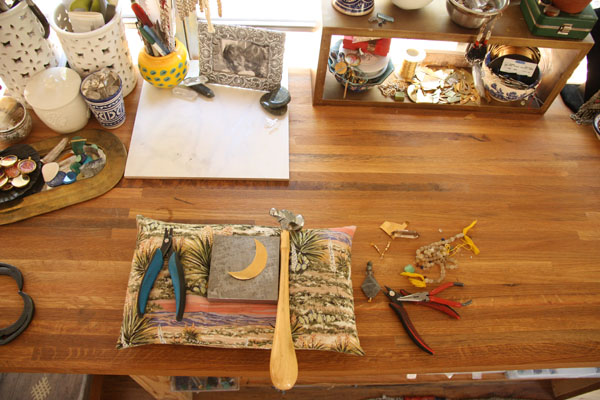 What do you do for Internet while on the road? I haven't taken her on a long road-trip yet, and with shorter trips the intention is unplugging.

What’s the hardest thing about living bus life? It isn't quite fair to say I 'live' in it, however sleeping and working in the same space can take its toll. I tend to stay up too late working or wake up early and can't fall back to sleep because I feel my jewelry calling me. Oh, and I love all of the light from the windows, but it can be a tad fishbowly if we're trying to have private time.