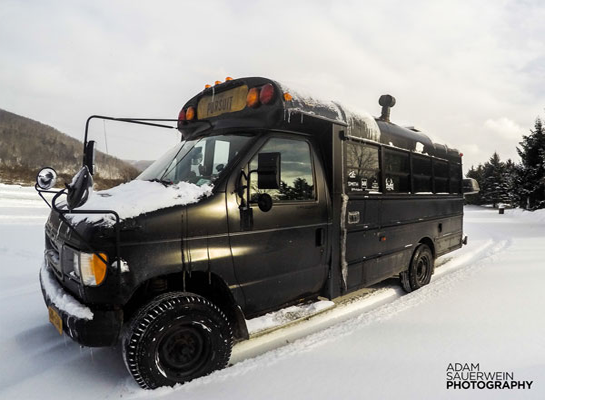 Adam Sauerwein is one unique human. He's an avid outdoorsman with a love and passion for skiing and photography but he can also claim that he's now completed two bus conversions. Yes, two. Why two you may ask? Well the first one had some major hiccups in the interview below that you'll read about. Through Instagram and emailing back and forth I've come to know Adam on a much more personal level and can tell he's one of those people who will continue to fascinate you with his outlook on life and his goofball or "don't take life to seriously" attitude.

In this interview I wanted Adam to give us an insight on why he chose to live in a bus and how he managed to keep his spirits high when his first bus ended up in the junkyard after only living in it for a year. I was able to help give some advice on his second build and the finished product is outstanding. Enjoy the writeup below and learn how Adam views the world through his eyes.

-Cost in materials for the conversion: $1500ish

-Is the conversion complete or still in progress? It’s livable but it’s ever evolving, Just added two more shelves, cup holders, new storage box off the back, It never ends!

-Does your bus have a name?  “The Pursuit” 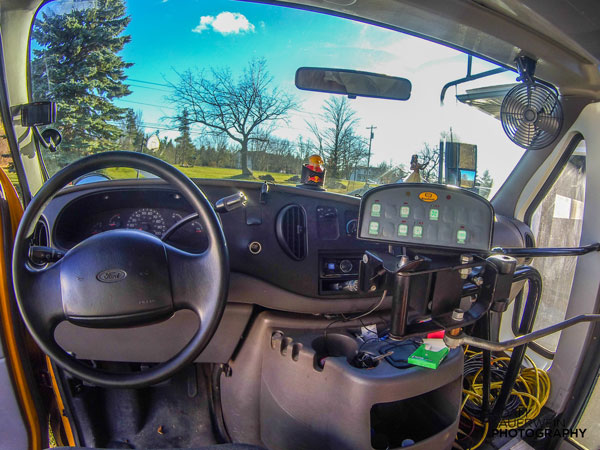 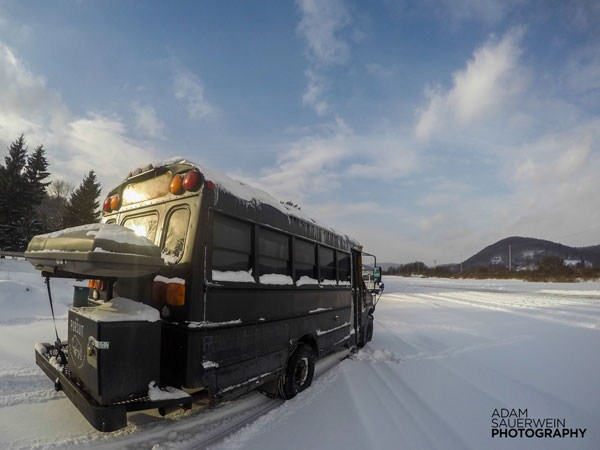 Tell us a bit about how the idea to build a bus into a home on wheels came about. Well many may not know, this is actually my SECOND bus build (womp)  So for years I had this idea of buying a short bus, not necessarily to live in it, but mostly because I’m weird and I thought having a short bus would be rad.  But as I researched them I slowly learned people were making them livable, being 28 and sick of paying rent for seasonal ski condo rental. I decided this was my opportunity to escape the rent and live wherever I wanted. 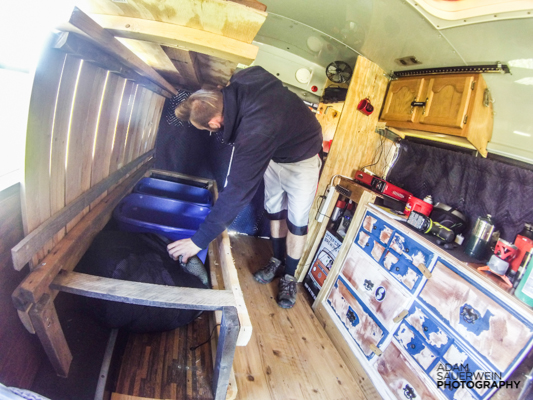 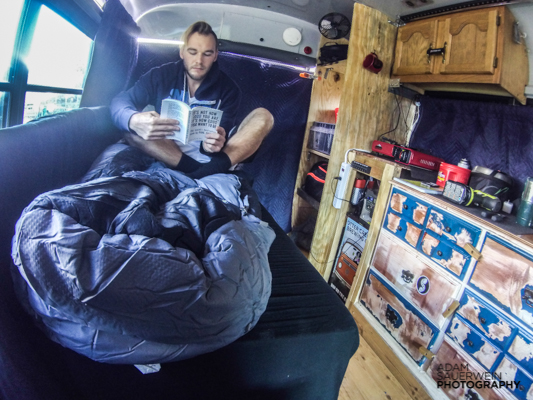 Who is involved or part of the crew with your bus? I would say this bus is my brain child, I have had some friends help me do some welding and painting (Joe + Bob) but 100% of the inside is built by me.  I have a great crew of friends who are always down to travel with me in it.  Shout out to Pat, Mike, my filmer Corey (ChiefCo) and all the boys at The City Garage.

Adam at work keeping beers cold in his Orion Cooler and listening to some beats with his Big Turtle Shell. (25% discount code for Outdoor Tech: THEBUSLIFE) 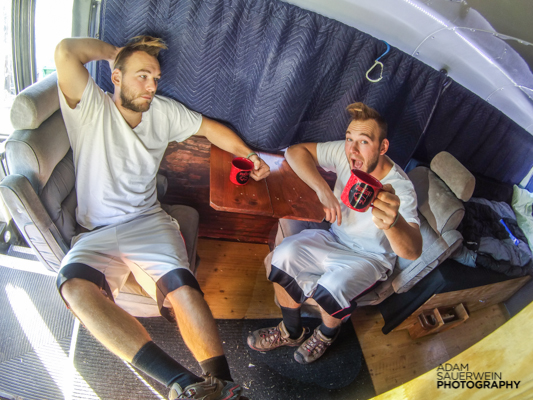 What materials did you use during your build? Any reclaimed/upcycled items? I see road signs... What's the story behind those? Materials on this build are pretty simple, I went to walmart and snagged about 10 pallets, broke them down, sanded them and stained them. (That was one wall) After completely getting my ass kicked I decided to buy some wood paneling for the second wall (Judge me!)  The pallet wood came out really neat, but it wasn’t as clean as I had hoped, and I was on a massive time crunch.  I picked up some Captains chairs off a dude on craiglists for $30/each with swivel bases (Insane deal).  And stole an awesome idea off of you (Brock) I used street signs and license plates as my heat shield.  My buddy is a tow truck driver and had a ridiculous collection of street signs and plates so he hooked me up and now I’m good to go!  Other than that, it’s old ply wood from the first bus.  Oh! And I used some of the foam from the bus seats as insulation!

How many can the bus sleep and how is the sleeping arrangement designed? 3-4 people but it’s really made for one, I made my first bus to sleep 6 and rarely had guests so I decided to make my sleeping situation much more comfortable (for me) and worry less about my guests.  There is a 30inch wide bed that folds out to 60in if I have a guest.  The bed also flips up flat to the wall for access to storage underneath. Then there are the captains chairs, it’s actually not too bad sleeping in them, they are directly next to the wood burning stove so its extremely peaceful, warm and comfortable. 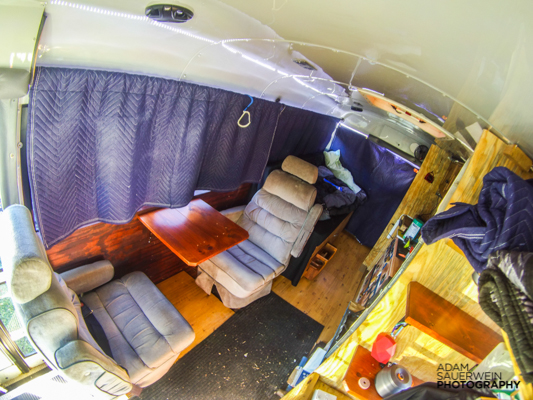 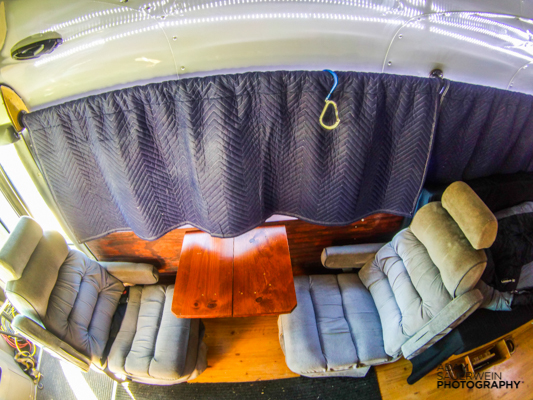 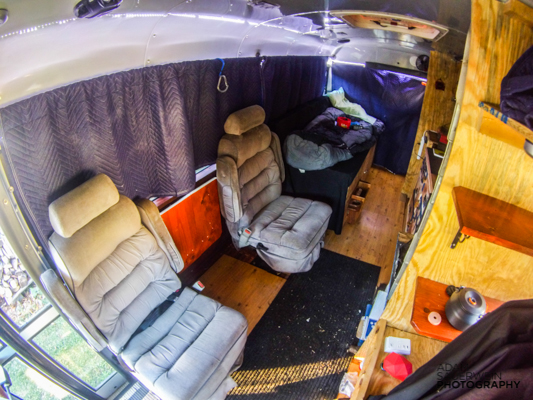 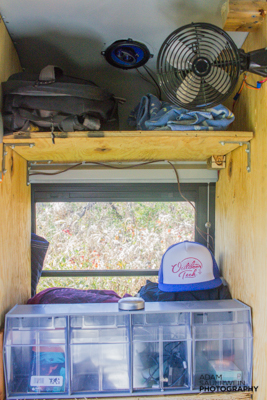 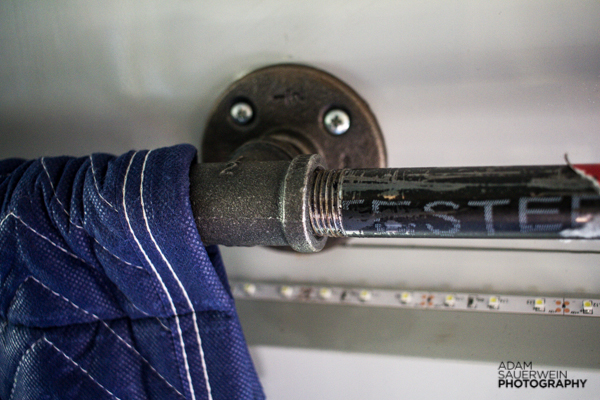 For kitchen cooking Adam has a single burner butane Camp Chef and the GSI Pinnacle Cookware.

What is your power source? Power! Ok So I’ve got one 100watt solar panel from Grape solar (GS-Star100 Polycrystalline) that runs into TWO Goal Zero Yeti 400’s. I also have 1 20watt Sunsei Solar panel that runs into my Sunsei SE-CC10000 10 Amp Solar Charge Controller which then runs into two deep cycle marine batteries. I use the yetis to charge all of my toys (gopro, canon, laptop) and then I use my marine batteries to run my “house” power.  (Lights, fans and anything else I can rig up to them)

For power Adam has solar panels on top. He's also using a wind breaker chimney top that stops wind from blowing smoke back into the bus.

Is your only source of heat the wood stove or do you have a backup? Why did you decide to go with a wood stove? This is probably the thing I am most excited about! Last year I used a Mr Heater Big Buddy attached to a 20lb propane tank. The thing rocked, it cranked heat and worked extremely well, BUT the huge issue for me was that being a skier/winter adventurer everything I owned was wet, and propane is a “wet heat” so I had major issues with moisture in the bus.  Now I have a Kni-co Trekker stove (as recommended by Brock) I’m looking forward to taking advantage of the dry heat and being able to keep a fire running all season.  Winters on East Coast are not forgiving, we have weeks that didn’t go above 0 so I’m stoked to have a fire in there. (Note: I will still keep the big buddy under my bed just incase I need some type of backup, but the stove will be my number one source of heat all winter)

What are you doing for water source? Do you have a bathroom solution for the "rumble guts" hit? I’m keeping it super simple for my water source, Two KleenKanteen Insulated growlers. Hopefully they will keep my water from freezing so I can drink and cook with it.  The Bathroom has been of major concern for many people.  I have a gym membership with 24hr access so that is where I do most of my business, I do have a small camping toilet that I hide in the back, (Reliance Hassock Toilet) for when I REALLY need to go. PRO-TIP: BABY WIPES ARE YOUR FRIEND 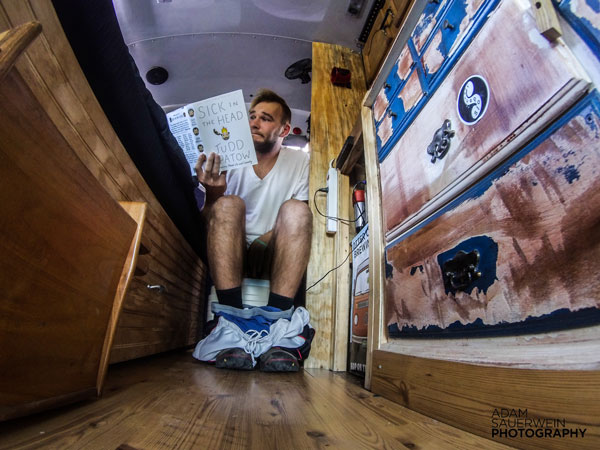 What do you do for income while living in the bus? I am a photographer, so I can work from anywhere. The bulk of my business happens in the summer (weddings) so the winter is definitely my slow season which allows me to travel, explore and get into stuff. If you’re a ski resort looking for your brochure photos…I’m your guy ;) (shameless plug www.adamsauerwein.com)

This is now your second conversion. What happened to the first bus and why did you decided to keep going with a second bus? I like to call the first bus a “soft launch” I barely did anything to it, I basically pulled the seats, added a bed, bought a camp stove and put a mr heater in there. I had no real “house power” or anything so last year was a battle, but I LOVED it, I knew I wanted to do it again and build it better. So spring came and I decided to do actual maintenance looked under the bus and noticed it was a complete mess, my shock towers were rusted through the cradle, none of the brackets holding the body to the frame were left.  I had a massive oil leak (which was an easier fix) and I needed to do brakes all around (also pretty easy) but I had to make a decision, and the decision was to let it die. It wasn’t worth investing any more money into so I let it die and I had started my search for a sprinter van or a Class B camper. As I looked and looked I soon realized vans and campers are expensive and they aren't designed how I want them. So I called my local bus garage (where I had bought the first one) and they had said they had nothing for sale. I had basically given up on trying to find one, craigslist ads were way too much money for school buses (Living in Buffalo, people buy them for tailgating) and I just couldn’t justify buying an east coast rust bucket for $6000. Until one day I was driving home and passed the local bus garage as I saw a mechanic scraping off their logos, I immediately pulled in and asked if it was for sale, he gave me a price and I bought it that day…. The Pursuit was back, it happened organically and I knew it was right. I immediately pulled the seats and began to build the bus. 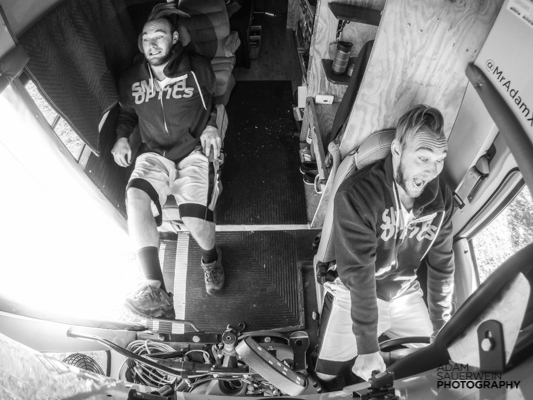 You can also watch Adam's web series called "The Pursuit" below.