"Meeting other like minded travelers or tiny dwellers with a passion to explore has opened our eyes to door number two that we never knew existed."

Alright, alright! Let’s start this interview off with a little intro from you two. Whom I talkin’ to?

Our names are Tyler and Lexi and we are both from Redondo Beach, California. We have lived and worked together bartending for the last five years until we ventured off into the buslife! 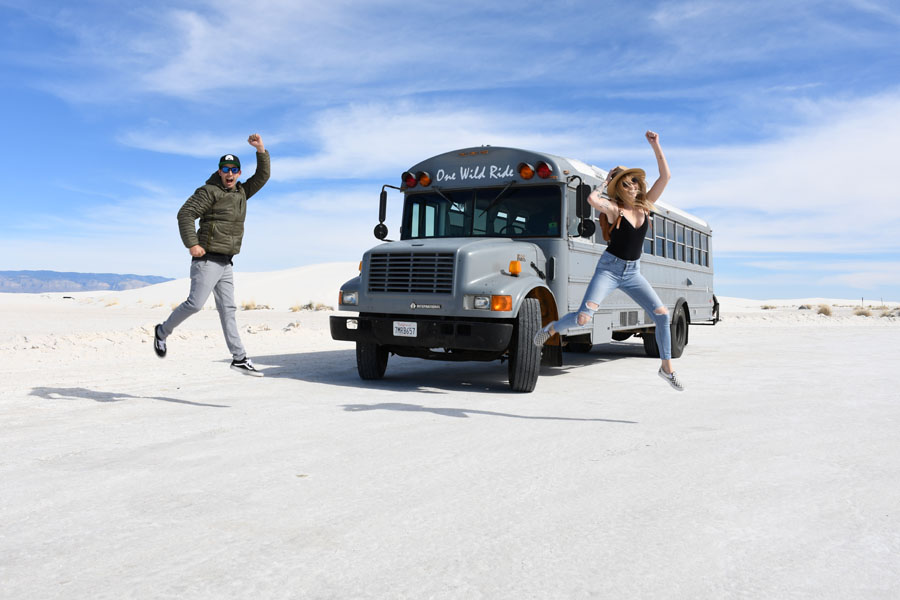 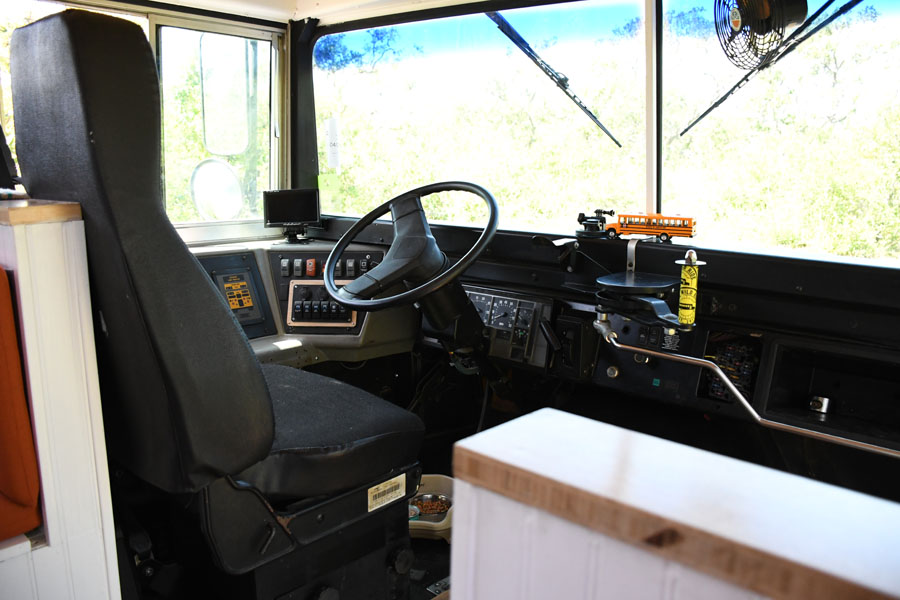 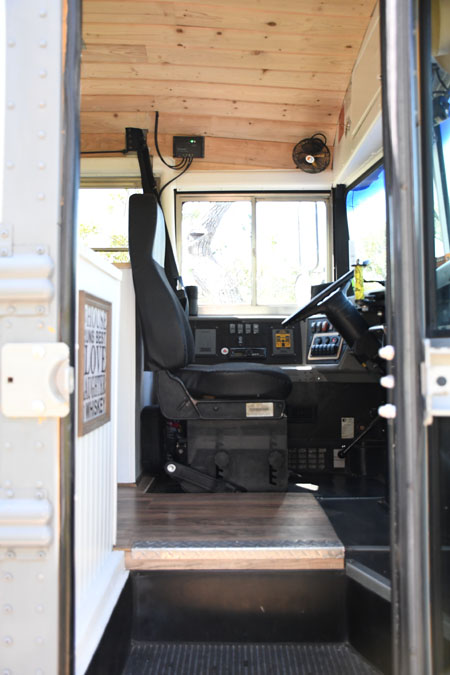 On your Instagram you hinted to a sketchy hotel stay when you went to pick up the bus for the first time. We gotta hear the story. What happened?

So, we had our eye on the bus on Craigslist for awhile and kept in contact with the seller. We watched the price go down and eventually made the five hour trip to Fresno, Ca to see it. We packed an overnight bag just incase, thinking there was no way we would make it back before dark or if the lights even worked. We drove around the corner and saw a bus that was 9 feet longer than we thought. But we checked everything out, did some test drives and bought it. We picked the cheapest and closest motel we could find and the room was pretty disgusting. It was right off the highway in a part of town I swear I've seen on Cops before. There were a bunch of semi trucks in the parking lot and then our newly purchased bus. We thought we were gonna get robbed or murdered, probably both, but we made it out ok.

How much did you guys know about converting a bus?

We knew nothing. Tyler had done construction in the past and built his fair share of skate ramps but never something like this. We have a lot of skilled friends that we knew would be willing to lend a hand. We always say that it was a group effort. 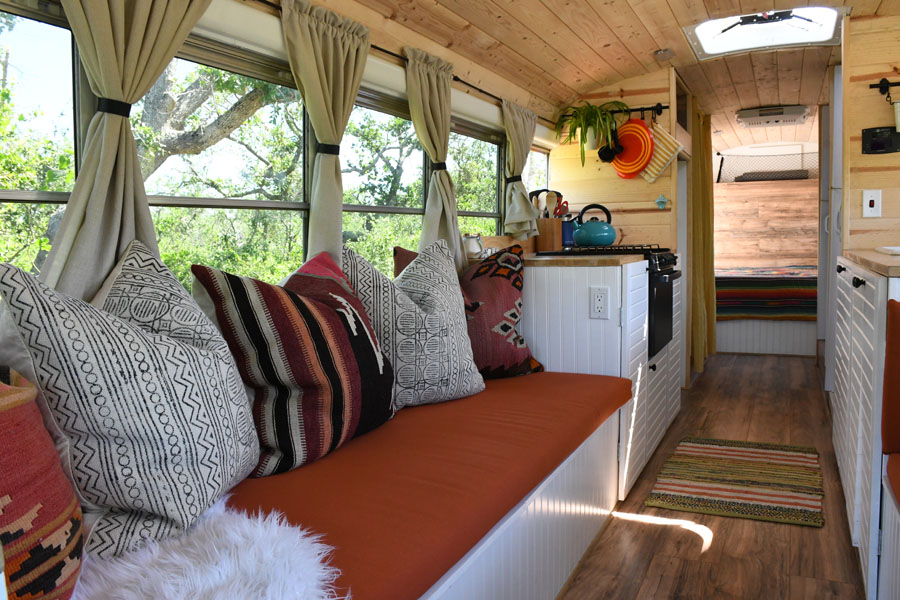 What were some resources (Instagram accounts or websites) that you pulled information and inspiration from?

Once we discovered there was a whole world of Skoolies out there and started searching through Instagram we couldn't believe how much motivation we found! Then you go to YouTube and find a tutorial on literally any part of the build you need help with. We obviously can't talk about inspiration and not mention buses like navigationnowhere and theskoolie, who were some of the first accounts we followed. Now we follow hundreds of conversions each one different than the last. As far as the decor goes, Lexi gets full credit with the help of Pinterest! 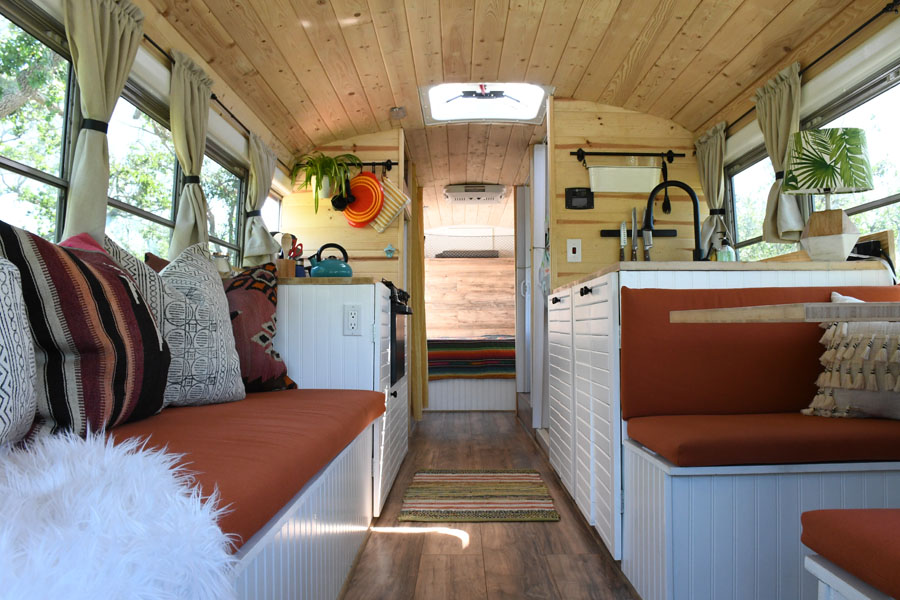 What was the hardest part of your school bus conversion?

Honestly, the two things that come to mind are probably not your typical answers but one would be just buying the bus! Searching and deciding if we were really ready to move our whole lives into an old bus and leave everything we know behind. I could say ripping out old heaters and AC or figuring out how to do all the electrical but we knew we would have help and it was what we signed up for. Number two was finding a place in L.A to park and work on the bus! 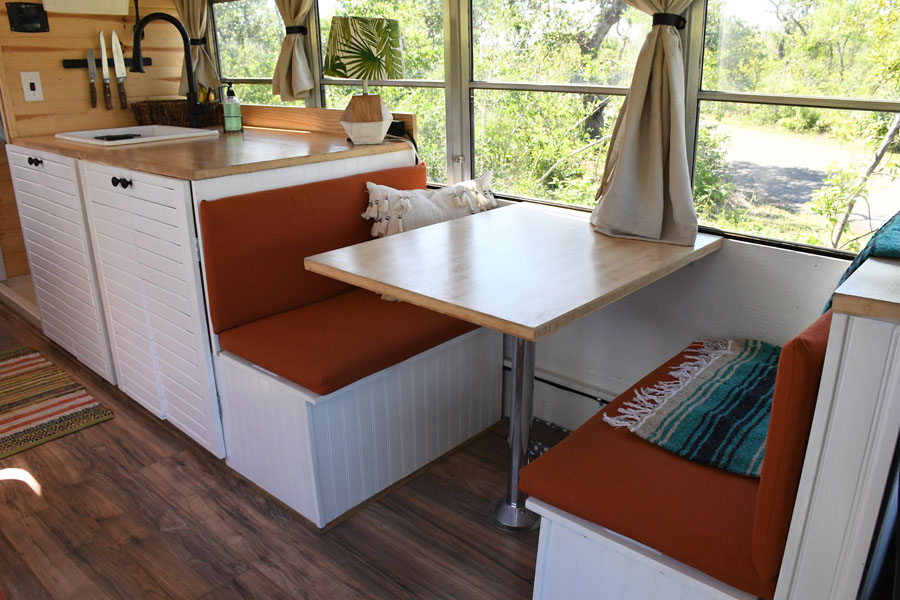 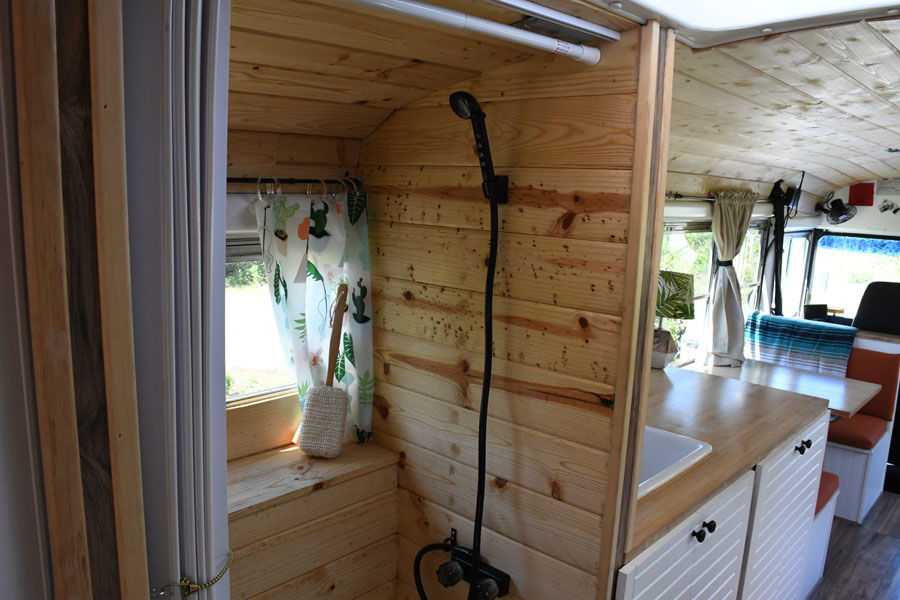 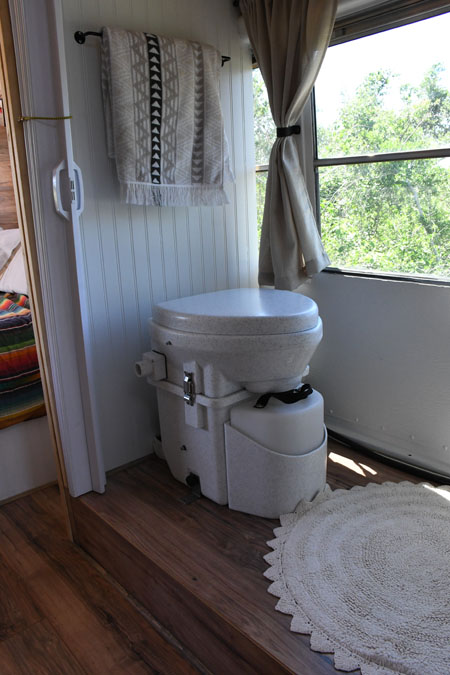 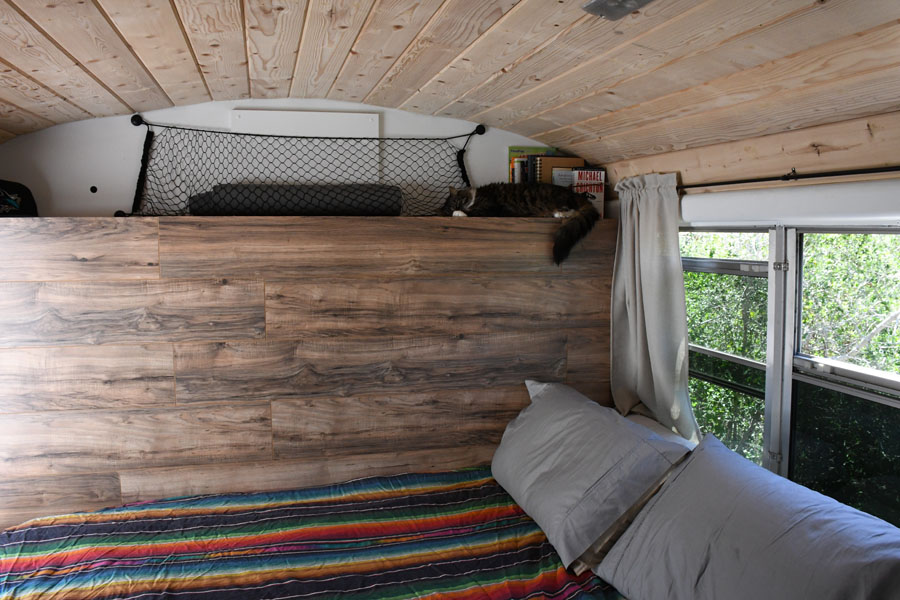 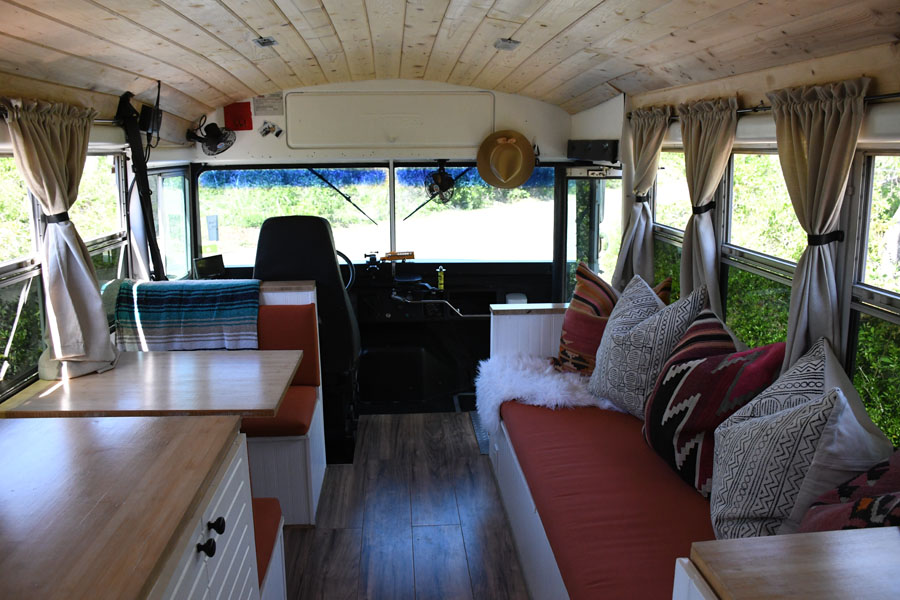 How in the f*ck do you guys sustain this lifestyle? It looks like all fun and no work…

I’m sure most that have converted a bus and travel fulltime will agree that it is absolutely nowhere near as glamorous as social media makes it out to be! We saved and sold basically everything we own to give ourselves a one year budget IF done correctly. Lexi also works remotely in direct sales which has been a huge help when we get to a city and blow half of our money for the month in one weekend! 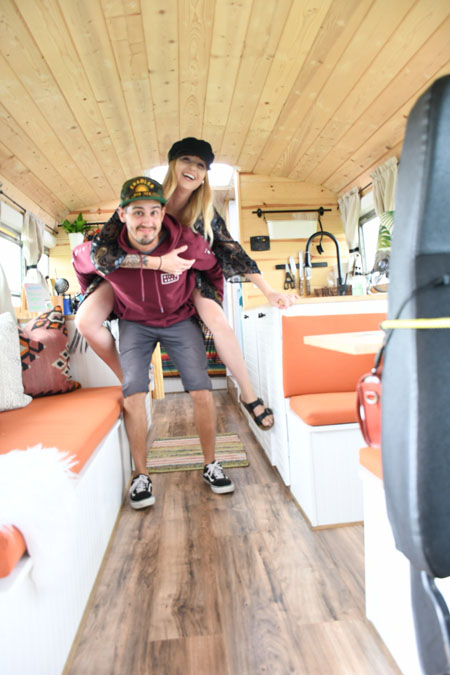 In your skoolie, I spy with my little eye something fury and ferocious… How’s bus life been for Ruca?

Ruca is killing buslife. We were extremely worried before we left that she wasn't going to adapt and we would have to leave her behind with family or friends. On day one she wasn't doing so hot. She was drooling all over, very car sick and having trouble walking around. Day two and she walked down to the couch, jumped up and went straight to sleep. She loves the bus and will go to the bottom step but never runs away. She sleeps in between us every night. She is like our child. Haha 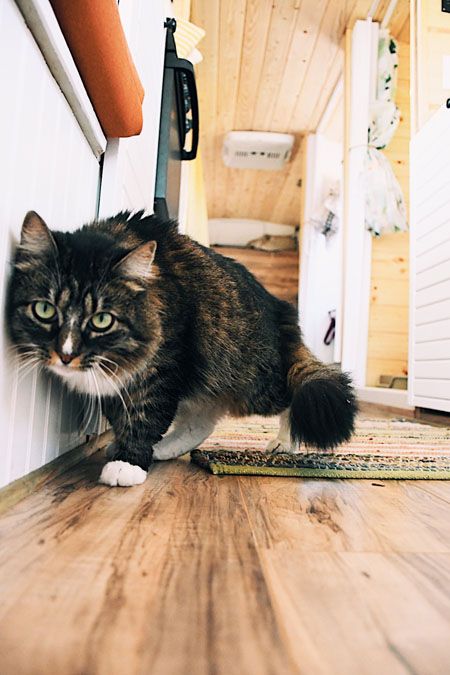 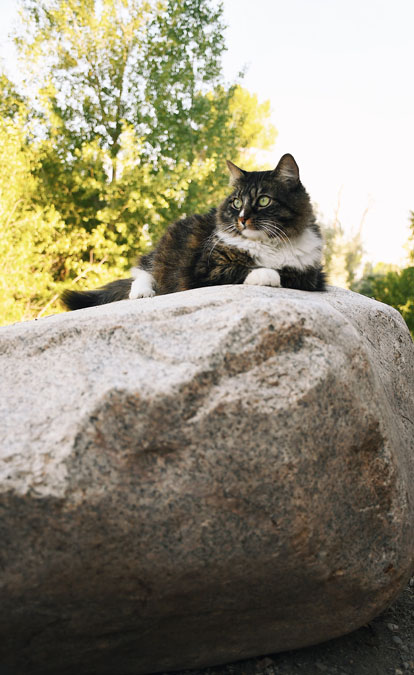 Looks like you guys spent some time in Oklahoma City. Have you ever had beer in the beer bus there?

We have not! We wish we would of heard of that while we were there! We would however, recommend going to Stroud, OK to the Rock Cafe on Route 66 and getting a patty melt and some sweet tea! Lexi has some family in OKC so we took some time there and caught our breath a little. Luckily we got to stay with a family friend and enjoy some air conditioning in the 100 degree heat! Our little RV unit on the bus only works when we are plugged in to shore power.

What is the biggest thing you two have gained from converting a school bus into a tiny home on wheels?

I think just being able to cut ties from what we thought we needed. We have learned so much already in the last four months about what is important to us. How the idea of normal that is drilled into everyone's heads about going to school, getting a job and buying an overpriced house to start a family and grow old in does not need to be our fate. Granted there is nothing wrong with that, but meeting other like minded travelers or tiny dwellers with a passion to explore has opened our eyes to door number two that we never knew existed. I don't think spontaneity lasts forever and building a traveling tiny home and doing this while we still have the drive is something we are stoked we followed through on. 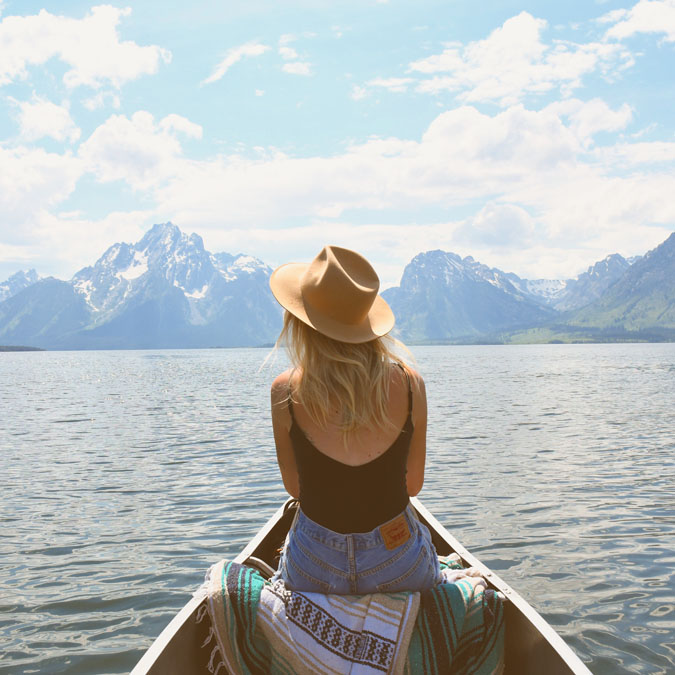 Number one, must have item for a bus conversion?

Well after making sure the bus runs, solar! We only have 400 watts and it has been a life saver! Why would you not want free power? We decided last minute to order solar off amazon about four days before we were leaving. And unless you have a ton of batteries, we don't know how we could have boondocked as much as we do without pulling out our generator. That, and of course our Planetary Designs french press. We need our coffee! 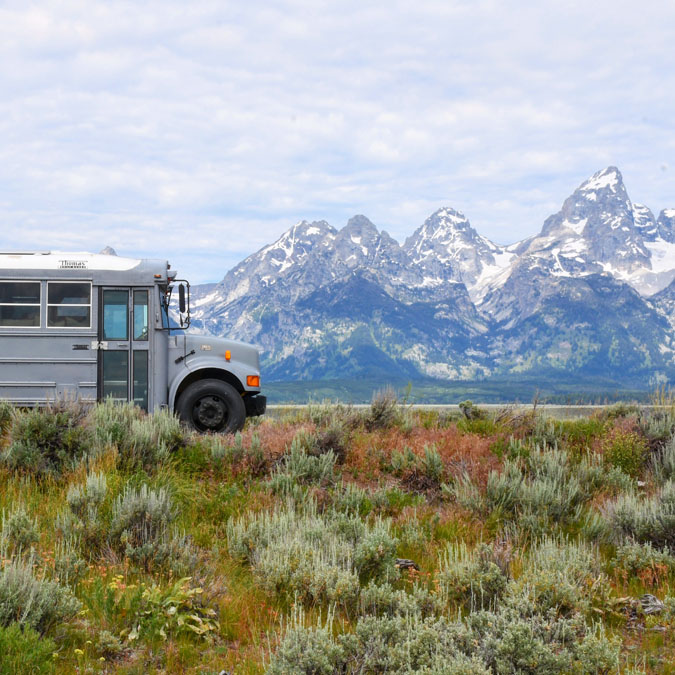 How do people follow along with your adventures? Hit me with your social medias!

We are on Facebook and Instagram @onewildridebus and YouTube as One Wild Ride. We usually try to have a new episode out once a week! If people are not on social media you can visit www.onewildridebus.com which has all the same photos and videos as well as blogs about our travels, buying the bus and our crazy trip to India! 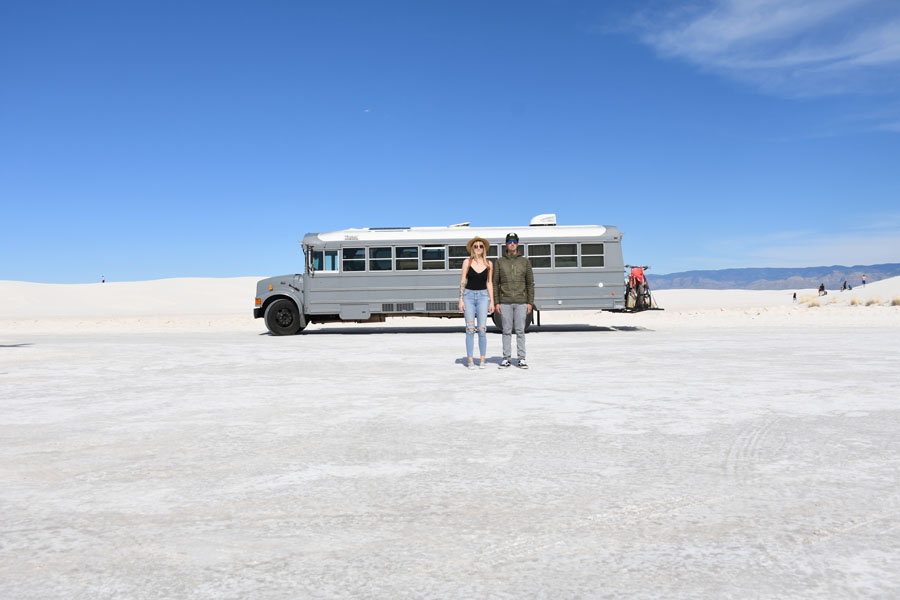