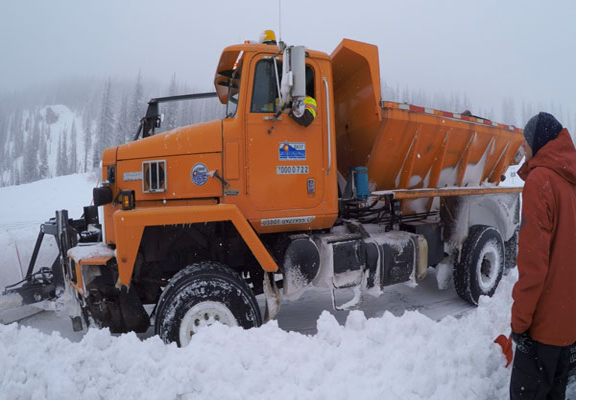 As we tried waiting patiently in Jackson Hole for the storms that were supposed to produce some good snow, our phones and Facebook were being hit with messages of insanely deep snow in Colorado. Upon doing a little research and looking at the radar on NOAA we could see that southern Colorado was about to be hit with what could be a seven foot storm total by the time it was all said and done. The decision was easy. We have the ability to chase storms with the bus and that's exactly what we decided to do. It was roughly 9 hours from Jackson Hole to Buena Vista, CO and that seemed like a good stretch to cover in a day. Unfortunately we hit the storm head on going over Tennessee Pass between Red Cliff and Buena Vista and we limped along at 10 MPH in 4 wheel drive while feeling like we were traveling through space at light speed with the snow flakes blasting our windshield.

The rest of the photos below which have been made interactive by using OVRHD tell the rest of the story. Hover your mouse over or tap if you're on your phone/tablet and click on the information icons to read more about the adventures.

The drive back to UT to fix the snowmobile deck was fairly easy going without any hiccups. I met with Seth from Trail Ridge Off Road and we put a plan together to fix the sled deck from sagging by boxing in the frame and adding some support structures. While Seth worked on resolving the saggy bus, the rest of us met up with "Kickstarter Mike" for some riding at Canyons Resort. Mike had donated the most amount of money on our Kickstarter which earned him a day of snowboarding with us and a night stay in the bus. Mike passed on the crowded bus and went with his comfortable condo he was staying at with his kids and wife who we cooked dinner for after a day on the slopes.

Trail Ridge Off-Road finished the reinforced snowmobile deck and we loaded up some supplies for Jackson Hole where we hoped to catch another storm. Along the drive to Jackson I noticed that Bruce The Bus had no power on anything uphill. I had the pedal mashed to the floor and he just didn't have any power. It wouldn't down shift so I assumed it was a transmission issue. I took the bus to Jackson Hole Express Lube & Carwash where they helped changed the transmission filter and add new fluid as I assumed that was the issue.

That same day we went out past Togwotee Pass to pick up the snowmobiles we had left and the bus still didn't have any power going up hill. I called Rich at Gillet Diesel Service and we determined that the issue was the waste gate on the turbo. It was getting stuck fully open and not allowing any pressure to build up to create torque and power. I tore into the motor and found the turbo and waste gate. With a little help from our photographer and friend, Ben Giradi, we were able to wire the waste gate completely shut permanently for constant power and it worked liked a charm.

We struggled to find good snow to ride over the next few days and as we started making a plan to wait it out for the next storm in Jackson. At the same time a huge storm system moved into southern Colorado with up to 7 feet expected by the end of the storm. This caught our interest... 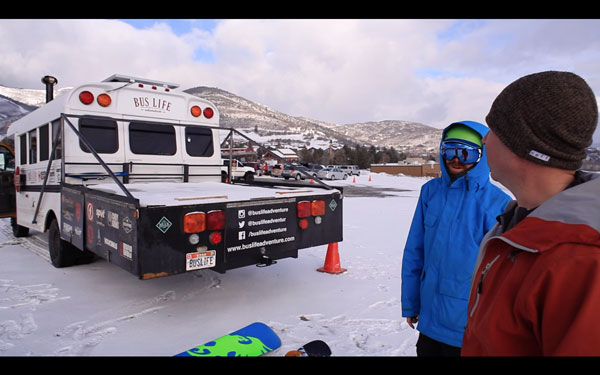 Linking in with Kickstarter Mike. 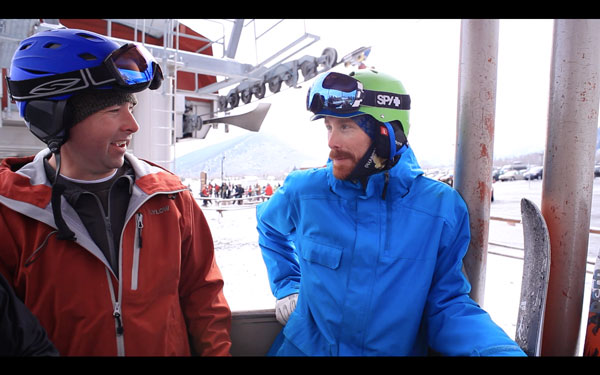 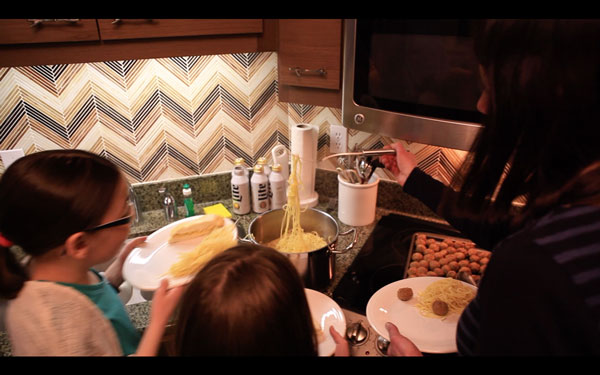 Pasta and meatballs with Mike's family. 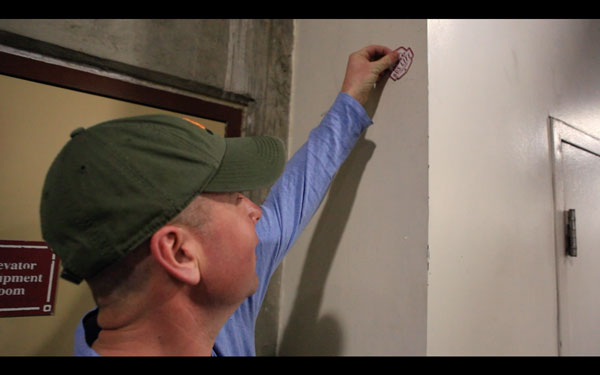 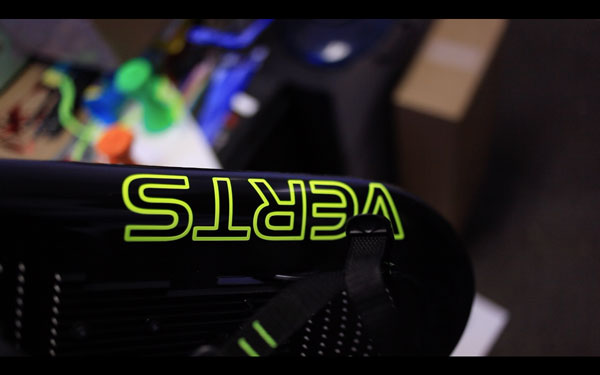 We made a stop in the Verts factory. These simple little snowshoes make climbing snowy mountains easy. 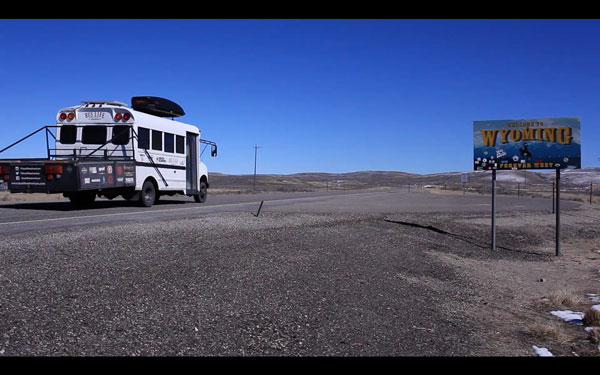 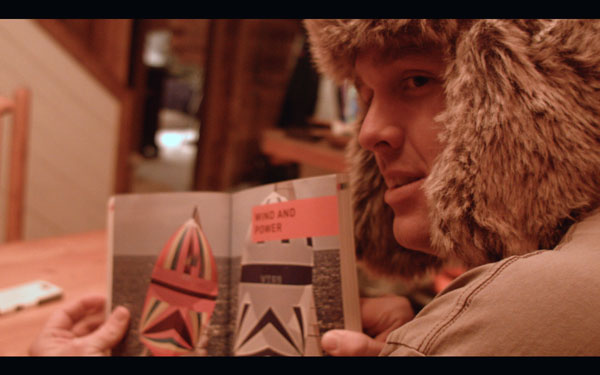 Our buddy Dave let us crash on his floor for a few nights. Thanks Dave! 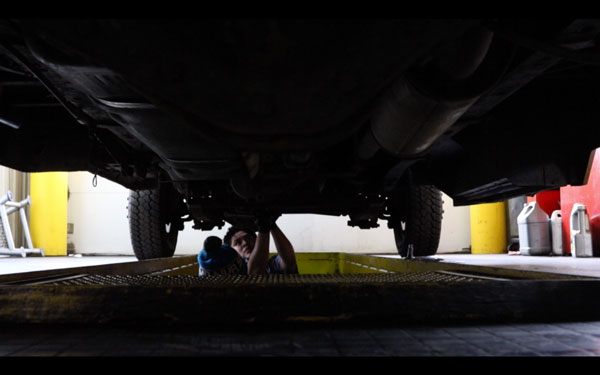 Jackson Hole Express Lube. This dude taught me a lot about transmissions in a short period. 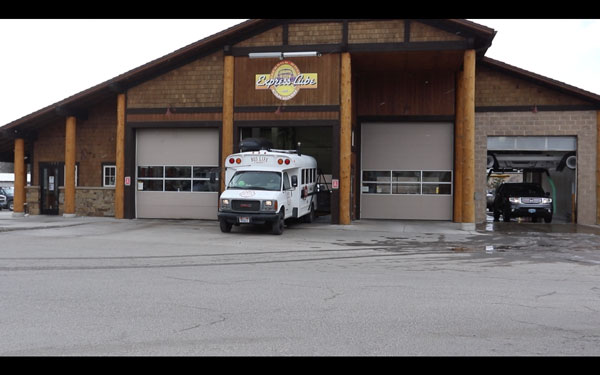 We departed Colorado and headed towards Jackson Hole. The head wind was extremely strong and we watched our miles per gallon go down drastrically. To make matters worse Cub's Toyota Tacoma lost all power in the middle of nowhere in Wyoming. A few calls to Triple A and we were able to get Cub's truck and snowmobile trailer towed to Rock Springs around 1AM. The following morning Cub pulled his tools out and started searching for the problem. We traced it to a bad fuel pump and luckily the Autozone in town had the part we needed. Cub, Brian and I dropped the fuel tank and replaced the bad fuel pump in the sleeting rain. It ain't always easy on the road but with good company you can tackle just about anything.

We arrived in Jackson and made our way to Teton Pass to test our the snow pack and get a few turns in. We found fairly good snow but the avalanche danger was high and we spend the rest of the day boon docking powder on our snowmobiles. The following day we knew we had to get to higher elevations so we made our way up to Togwotee Pass for some better conditions. We spent almost a week camped out at a trail head that required us to travel over 50 miles round trip everyday to ride a hidden zone we were shown last year. Before we could make it out to the zone for filming Brian's sled cracked a piston and we spent the day pulling apart the motor to find the problem and order parts from our SPOT satellite phone for pickup the next week. Our good friend Rajat had a spare older sled that we were able to borrow for the rest of the days filming.

The bigger issue we faced at the end of our stay was the fact that the snowmobile deck had bent the frame of the bus again and we would have to leave two snowmobiles in Wyoming in order to drive back to UT to get it fixed. Life on the road is fun but never easy. 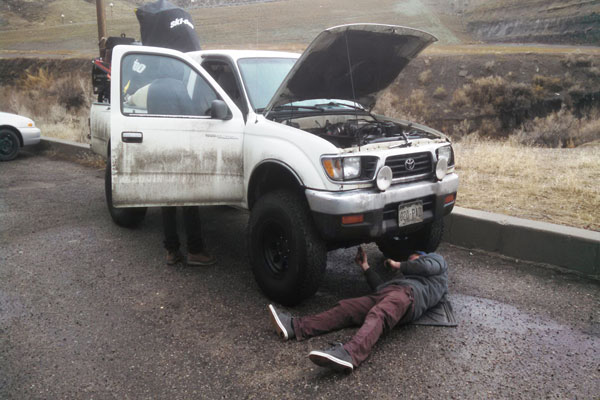 Cub getting dirty first thing in the morning. 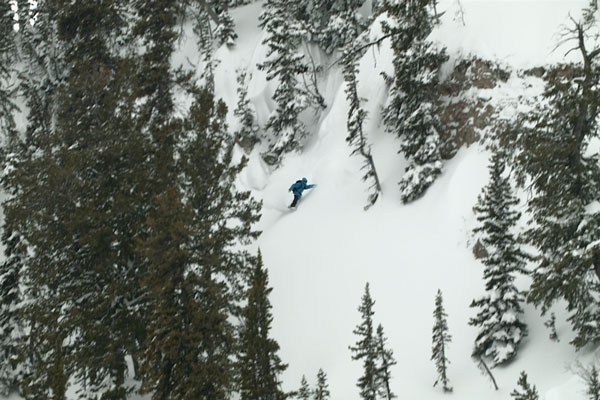 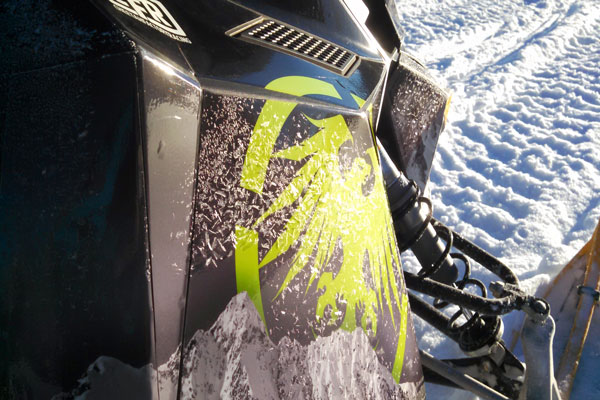 Cold mornings in WY before we hit the trail at 6am. 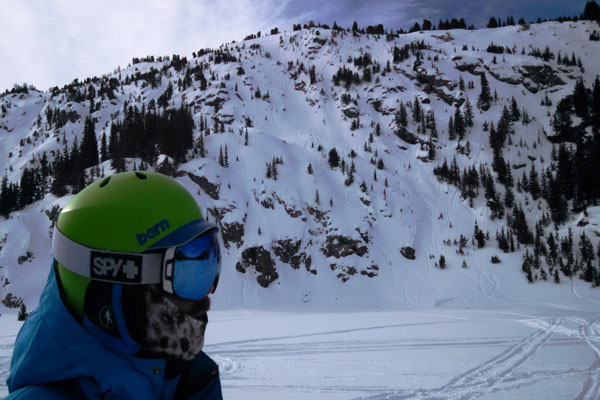 We rode and filmed every line you could in this secret zone. 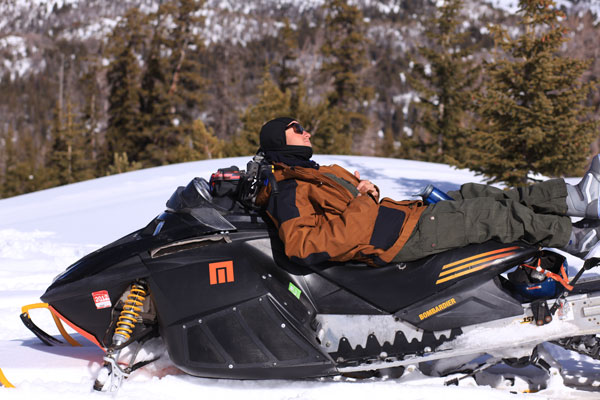 Cub soaking in the sun in between filming.

Backcountry beats provided by our Buckshot from Outdoor Technology. 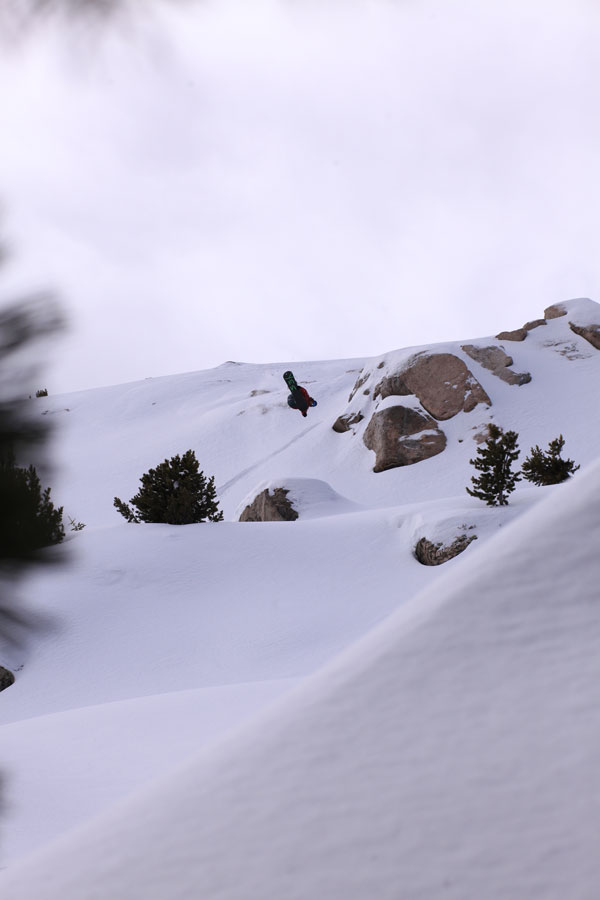 Colin Spencer getting upside down off some natural terrain. 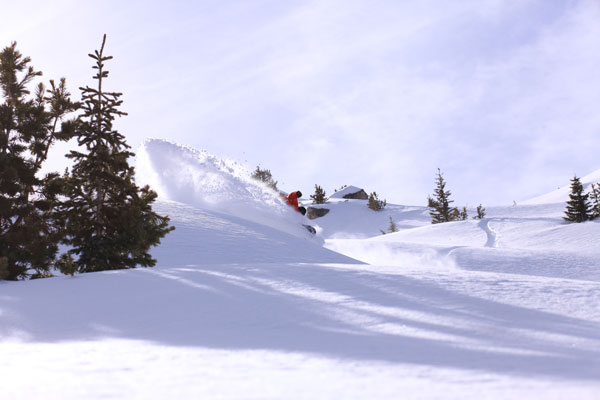 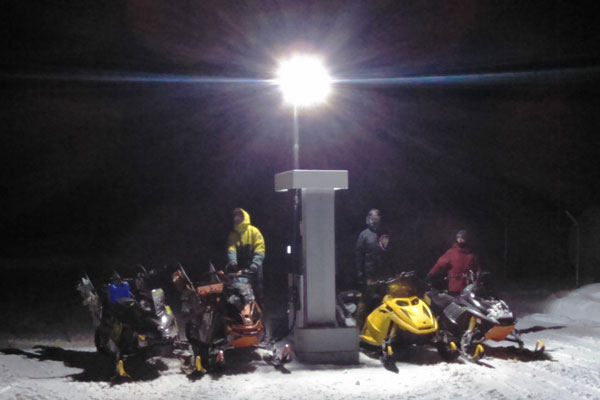 Long days require us to gas up in the night. Luckily we had a spot just down the road from our basecamp. 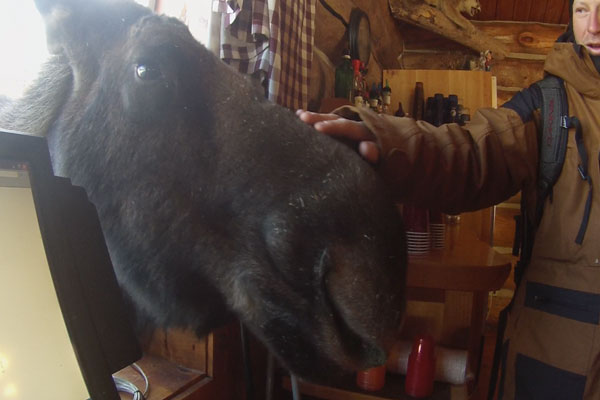 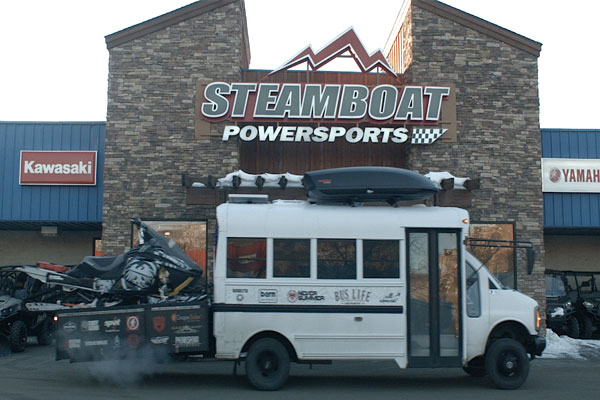 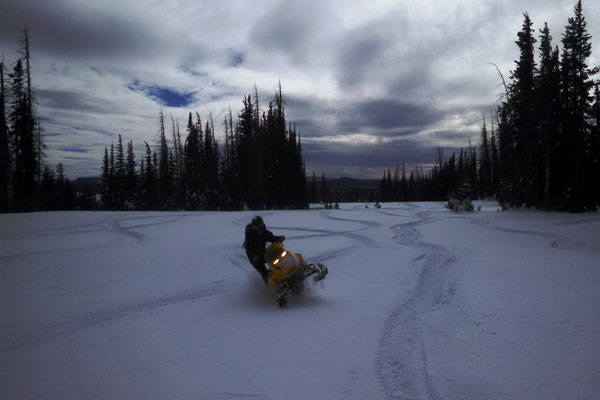 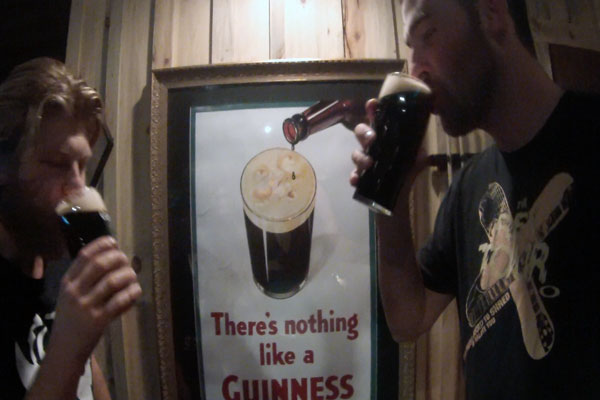 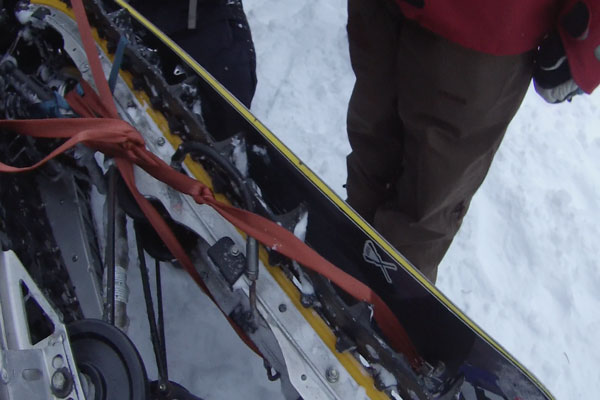 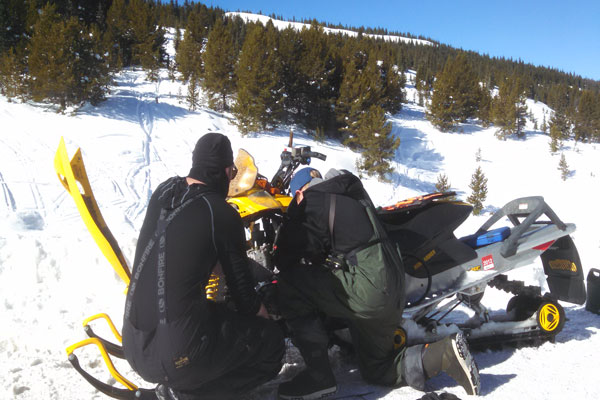 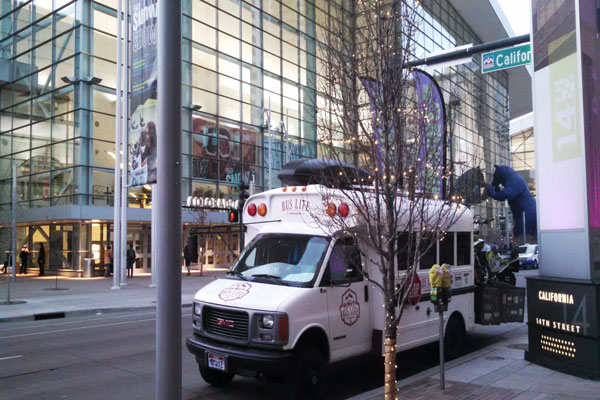 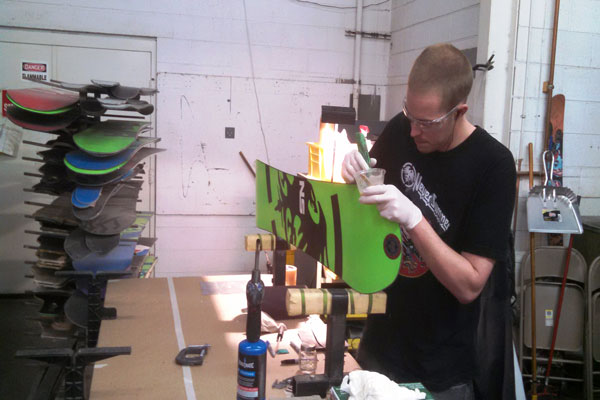 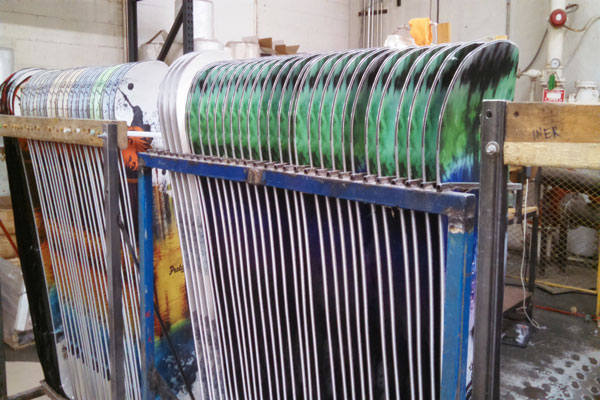 We are a participant in the Amazon Services LLC Associates Program, an affiliate advertising program designed to provide a means for us to earn fees by linking to Amazon.com and affiliated sites.
© 2014 - 2021 Bus Life Adventure