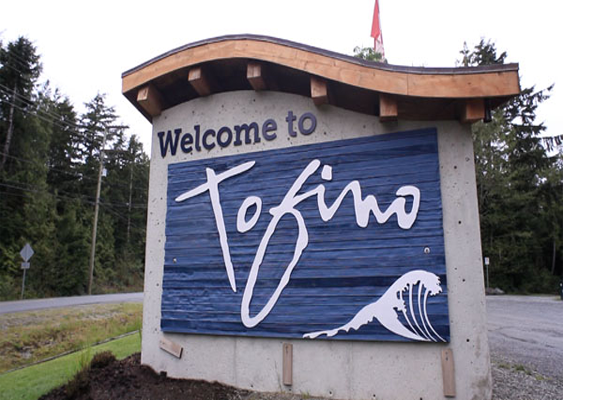 The drive down from Alaska was a long one and we ran into a little trouble. Bruce The Bus lost half his serpentine belt in the middle of the Yukon and we had to limp him along through 200 miles of slush snow before we hit Fort Nelson and were able to find a replacement belt. If you're ever traveling on the Alaska Highway you should always carry a spare tire, spare serpentine belt and a jerrycan full of fuel.

Once we made it down to Vancouver we hopped the ferry to Vancouver Island and drove the bus to Tofino. Our plan was to surf for a week before going our separate ways. Our first stop was Long Beach Surf Shop to rent some wetsuits, buy some cold wax and get the low down on the surf and swell. The guys in the shop are the best and had the widest selection of wetsuits and boards for rent. We felt like we were locals while at the shop and got to see their little record store inside as well.

One of the best and most memorable parts of our time in Tofino was meeting Adam. Adam rolled up to the parking lot on the beach where we were camped in the bus and was fascinated by the bus and the fact all of us were living in there. He owns the local coffee shop Tofitian in town and offered us a place to park if we got kicked out by the cops. He also invited us to go crabbing with him one evening and we witnessed a bald eagle swooping down from the trees and grabbing the old bait from our crab traps. Later that night Adam showed us how to cook and crack the crab shells. We had a gigantic feast of crab and wine.

The surf was good for the time that we were there. Cub, Colin, Chessa, Kelan and Brian are all experienced surfers and attempted to help me get a wave under my feet but I struggled a bit with the big we suit, gloves full of water and booties acting as weights. The rest of the crew caught some good waves and I filmed from the beach with a PBR in my hand.

After Tofino we went our separate ways and I was left alone with the bus to myself. After almost 5 months of living in 76 sq ft with up to six total people I had the bus all to myself and it seemed like a mansion. I could spread my arms without poking Brain in the nose as he snored himself into a slumber. Getting to anything in the bus was no longer accommodated with the words "Can I squeeze by?" It felt lonely the first few days but I'm slowly getting used to it. I have everything I need in one small Tiny Home on wheels. Life In The Bus Lane continues...