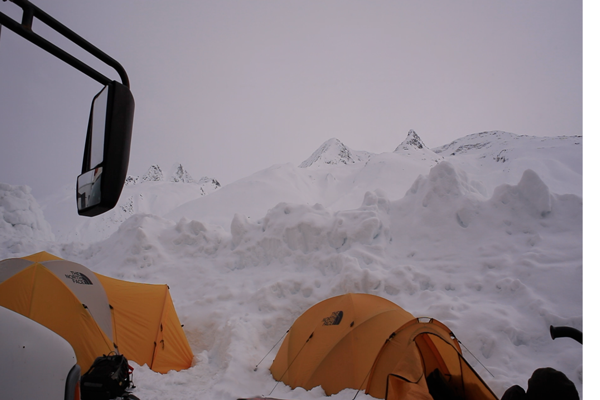 After spending almost two weeks on Haines Summit we decided it would be best to move on and head to Thompson Pass just outside Valdez, AK where a handful of our good friends had flown in and were giving us reports of great snow conditions. Ben Girardi stayed in Haines to shoot photos with another group of snowboarders but Aaron Dodds was ready to link in with us when we arrived at Tailgate Alaska.

Mike Hood, Brady Farr, Kalen Bamford and Nick Decicco joined us for the duration of our time in Alaska and we spent over two weeks exploring new zones and visiting old favorites. The snow for the most part was perfect until the end when it began to get warm and the rain level was higher than we'd ever seen it. After seeing some very large natural wet slides we decided it might be best to call it a winter and head south for some surfing.

Down days in Alaska while we wait to ride.